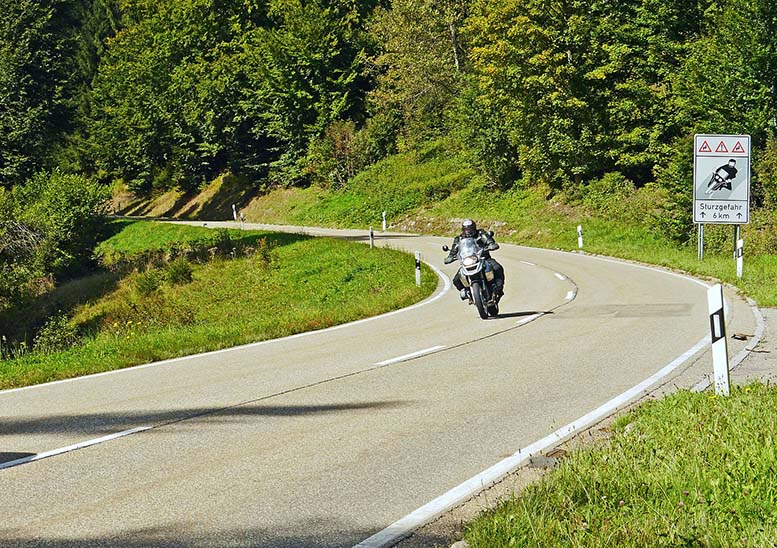 You don’t have to ride for days and days to sample continental culture. A bike trip to Germany’s Black Forest is a piece of cake – and the roads are the cherry on top. Let Magellan tour guide Felix Billington explain the naked truth about this glorious region…

Why would I go there?
Quiet traffic-free roads, great accommodation, good food and cheap beer make the Black Forest region of Germany one of the top destinations for European bikers… and for us Brits too!

Once out of the main towns you’re faced with a panorama of fairytale forest from horizon to horizon, broken only occasionally by tiny ribbons of smooth, black tarmac.

It’s a fantastic place to get lost; just turn off main roads and you find yourself thrown straight into Hansel and Gretel land, with quaint gingerbread houses dotting the landscape and small villages where it’s not unusual to see folk dressed in traditional lederhosen.

Where is it?
The Black Forest region itself is on the north-eastern border of France with Baden Baden being the German gateway to the region. It’s a one-day motorway blast from the Eurotunnel or two leisurely days on the winding back roads of France.

What is there to do?
The B500 is a must; armed with hairpin after hairpin to the top of the mountains and  sweeping bends back down, it is one of Germany’s oldest and best-known roads. Just keep an eye out for the postbox speed cameras!

The B492 and B294 are great roads to get on; lesser known than the B500, they don’t have the hairpins but they are visually stunning with no cameras so you can open the throttle up!

Triberg waterfall is worth a visit; water plummets with a descent of 163 metres over seven naturally created ledges to form an arresting show of beauty. Admission in the summer costs €5 and in the winter €3.50. There are many walking trails through the trees and there’s a restaurant too.

The Spas in Baden Baden are great for a relaxing day resting tired muscles. The water bubbles up from 2000 metres below ground and contains a host of restorative minerals to alleviate a variety of illnesses and generally create a feeling of wellbeing.

Lakes Titisee and Constance make for a relaxing afternoon soaking up the sun with a nice cold beer! If you’re feeling a bit more adventurous there’s a whole host of watersports to try too!

Freiburg Minster took over 300 years to construct and with ancient nanotechnology being used to tint its windows red, the cathedral is a distinctive landmark in the Black Forest. Visitors can walk up the 116-metre high tower to get amazing views out over the city. Opening times are 9.30am-5pm on working days and 1pm-5pm on Sundays.

Know before you go…
Watch out for speed cameras, the local police have clamped down a lot in recent years, especially on the B500. You will see cameras at the start and along this route but you may not recognise them – they are grey in colour and look like an English post box. They are nestled in the trees, so keep an eye out for them.

The weather can be very changeable even though there isn’t a huge change in altitude, but the fog can come in from nowhere so adapt your riding accordingly.

There have been quite a lot of roadworks in the area in the past few years and they sporadically close some sections of the major routes. If this happens to you, follow the ‘Umleitung’ sign (German for diversion).

Best time to go?
May to September is the best time to go, with a bit of luck April and October can work too but there’s a chance you will see snow!

Top Tips…
1. Get yourself some Black Forest Gateau! The B294 road has loads of places to stop where the cakes are out of this world!
2. Go to a traditional spa, no dress code required (if you get my drift!). The whole full nudity thing can take a bit of getting used to for our English sensibilities!
3. Avoid staying in central Baden Baden and go for one of the guest houses outside of town at the beginning of the B500 itself.

Key info…
While many of our Magellan trips travel through the area we also run several tours that focus on the Black Forest itself.