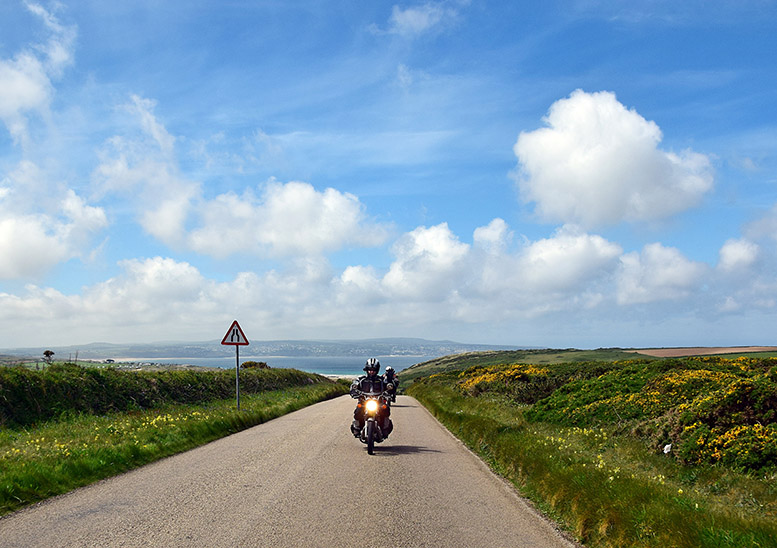 Adventures in your own backyard are often the most enjoyable, and few are better than a ride along the top coast of Devon and Cornwall. Beautiful views, great riding, plentiful cream teas. What more could you ask for?

As soon as you turn off the M5 at Bridgwater (presuming you’re riding down from the north), the adventure along the north coastline of Devon and Cornwall begins, and continues all the way to Land’s End if you have the time.

The route is easy to follow and the distance easily manageable over a couple of days. Some sections can be busy, such as passing through or around Newquay or Bude, but for much of the rest it’s a mix of picturesque harbour villages, quiet coastal roads and some stunning beaches if you have time to get off the bike for a swim.

In terms of a route you can’t go wrong if you generally stick to the road closest the sea. From Bridgwater it’s the A39 all the way to the infamous Porlock Hill, across the cliff tops to Lynmouth and Lynton.

Then it’s really worth heading out towards Valley of the Rocks before passing Lee Abbey and out along the narrow, cliff-top and tree-lined road that brings you out near the Hunters Inn. More back roads eventually bring you out at Combe Martin.

Head for Woolacombe and then the back road out to Croyde and Saunton Sands before you pass through Braunton, then out to Barnstaple and over the River Taw via the Taw Bridge.

You can head inland here to Torrington and then to Bude, or stay on the A39 which brings you out at the same place. Widemouth Bay is worth detouring to, with a narrow coastal road passing through Dizzard then onto Boscastle and Tintagel.

The picturesque port town of Padstow follows, with free bike parking on the harbour wall at the end of the public carpark, before heading to Newquay via the B3276 that takes in Porthcothan and Watergate Bay.

Around Newquay to Perranporth, then St. Agnes, Portreath and Gwithian until you arrive on the north side of Hayle. From there it’s an hour’s ride via St Ives to Land’s End, taking the scenic B3306 coast road all the way to Cape Cornwall, then Land’s End four miles to the south. Enjoy a meal or drink at Sennen Cove before turning around making your way back up, using the main A30 if you’re in a rush.

The great thing about Devon and Cornwall is that there’s plenty to do. There’s a good range of accommodation, from camping to hotels and youth hostels.

Food options are plentiful with pasties and cream tea guaranteed to keep your spirits up and your costs down and off the bike there’s chance to do some surfing or coastal walks, with the castle at Tintagel worth exploring.

In terms of riding, it isn’t as fast-paced as some people might like. There are no mountain passes or high-speed sections, but the roads are generally narrow and flanked with high hedgerows or long drops to the sea.

It’s more a place for a relaxed pace, and also a place you can explore without religiously sticking to a preordained route on your sat-nav. Explore the back lanes, take random turns and stop in places you didn’t know existed. It’s hard to get too lost so long as you keep the sea on your right.

From a biking perspective, take it easy as you’re likely to meet holiday traffic, tractors and cattle on the road.

You won’t cover a lot of ground quickly in these parts. In can be slow going so allow enough time so not as to rush.

Some of the best spots are the least well known. Taking the coastal back roads brings you into all sorts of small beach and port villages that are much more pleasant (to my eyes) than the big names such as Newquay or Bude.

There are plenty of festivals going on in the South West, mainly during the summer months, so it’s worth checking out some of those. Equally, rent a surfboard for an hour or so and get some waves.

Bike size is certainly not important down here. You don’t need a big bike and in fact it’s a bit overkill for some of the tight lanes, especially if you need to back up or turn around.

This area is perfectly suited to a 125cc and for the L-plater just passing their test it’s a fantastic part of the world to cut your teeth in the act of motorcycle travel.

Best time to go?
Ideally, you’d ride it in the summer as the weather makes a huge difference to how much you’ll enjoy the ride. It’s wise to avoid school holiday time, though. The roads are still rideable and there are some quieter corners, but some of the most popular places and roads in between will be slow going and congested in parts.

June is a good compromise, but then so is September if the weather’s good. Alternatively, brave it in the earlier riding season of March and April when you really get some of the roads and beaches all to yourself.

Top Tips…
1. There are some good suggestions for routes here: https://www.bestbikingroads.com/motorcycle-roads/united-kingdom/rides/south-west-england
2. The YHA has some great hostel locations in Devon and Cornwall, including the cliff-top location near Land’s End. Hostels are a great way for the solo traveller to meet friendly faces along the way: https://www.yha.org.uk/
3. For campsites try Pitchup, which allows you to search out those that are motorcycle-friendly (although most generally are): https://www.pitchup.com/. There’s also https://www.ukcampsite.co.uk/ that’s worth a look at.
4. As always take a puncture repair kit because help, by means of a recovery truck, can be a long way off in these parts.