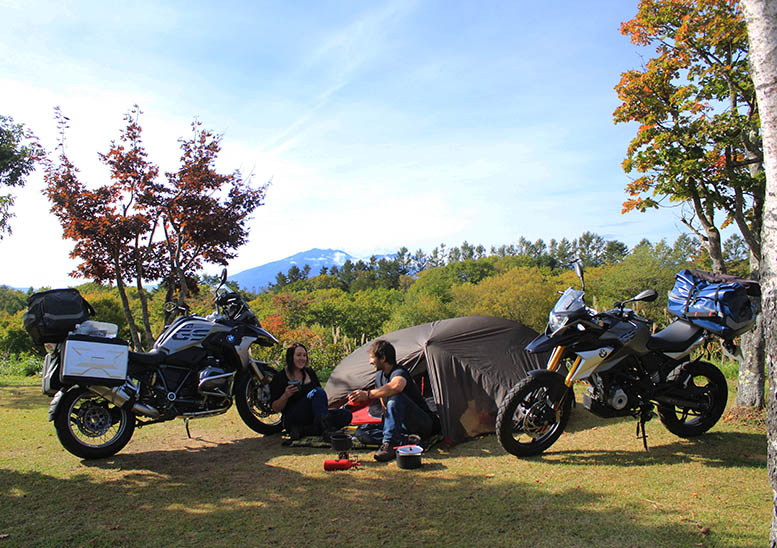 So many of us have bikes from Japan, but how many have thought about riding a bike there? Let world traveller Andy Davidson from Mad Or Nomad make the case for visiting… and it’s a pretty compelling one.

Japan is bursting with a mesmerising concoction of life that’s just so distant from what we’re used to in the UK.

Everything is different. Cars always pull over for motorcycles out of respect, pedestrians wait at lights, littering is unheard of, people don’t eat while walking, you can leave your keys and wallet on your bike and go into a shop without a care in the world and bowing and saying ‘thank you’ a million times is the norm.

But one thing here is not so different: Japan’s deep-rooted love of motorcycles. Well, there are some differences. The roads are packed with the most unlikely groups of bikers. A typical crew consists of three sportsbikes, a chopper, two scooters, the odd adventure bike and a monkey bike chasing at the rear. Bikes don’t club together by style here.

You can also forget the British biker’s subtle nod, the Japanese throw hilariously huge waves and even bigger smiles at each other. It’s brilliant, and the biking culture is incredible. Groups of friendly riders cruise the coasts and campsites are packed with them. Ride into a quiet little town and there’ll be a bike bar.

We rode through the mountains, slammed on the brakes and turned around to see a Kenny Roberts Café, which the former world champion has even visited! You can stroll into any of the Big Four Japanese motorcycle museums, ride with whoever you want and know you have a million friends around any corner.

Fly in, rent a bike and spend your days cruising this incredible bike-mad country. Explore Japan’s gorgeous mountain roads, glide along its sparkling coastal routes and hop between islands on little ferries in search of the weird and wonderful. You’ll get addicted to discovering Japan’s way of life. It’s an intrinsic, beautiful balance of unique culture, stunning scenery, fascinating history and a seriously cool bike culture. Have a go, you’ll love it.

Japan is an island in South East Asia, surrounded by the Sea of Japan, East China Sea and the North Pacific Ocean. Its closest neighbours are South Korea, Russia and China. Return flights from London to Tokyo are around £350 if booked in advance.

You can spend your days clambering up thousands of steps to uncover Shinto Temples shrouded in mystical incense, fog, and monks clattering religious bells. Or head into the cities for explosive cocktails of neon lights, robot restaurants, maid cafes and madness. There are a million things to do in Japan, like visiting Kyoto, Nara, Nagano, Sapporo, Miyazaki and Fuji.

And the best way to discover it all is on a motorcycle. Click into gear and ride into Japan’s towering mountains of Hakuba for incredible twisties and pristine tarmac. Spy on wild snow monkeys bathing in outdoor thermal baths before swinging south and chasing the Pacific coast road towards Japan’s southern islands.

When the sun dips, tuck yourself away in one of Japan’s many free and well-looked after campsites. In the morning, you’ll be met by a dozen other bikers all preparing and sharing green tea. Riding through the country means immersing yourself in its culture – and it’s incredible.

Brits can stay in Japan for up to 90 days visa-free. The only paperwork you’ll need, other than the obvious passport and driver’s licence, is an International Driver’s Permit (IDP). Without the IDP you won’t be able to rent a bike. But don’t worry, it’s easy to get. Just head down to the Post Office with a passport photo and your driver’s licence and they’ll give you an IDP in five minutes for £4.50.

If you’re renting a bike then vehicle insurance will be provided. And you’ll want your own personal travel insurance from home too.

How do I ride there?

You can either ride your own bike from the UK to Vladivostok, Russia and catch the RORO ferry to Sakaiminato, Japan, or you can fly and rent. There are plenty of rental companies to choose from, but to give you an idea of costs, Japan Bike Rentals offer a decent fleet of bikes like the BMW F800GS and Yamaha MT-09 Tracer or 07 or 03 models. Prices start at about £70 a day including fully comprehensive insurance and tax. You can also opt for a guided tour if you don’t fancy going it alone.

Andy and Alissa gave up their lives in the UK to travel round-the-world. They left on January 1 2018 and have just ridden 20,000 miles to Japan. Follow their adventures at www.madornomad.com or on social media as Mad or Nomad.