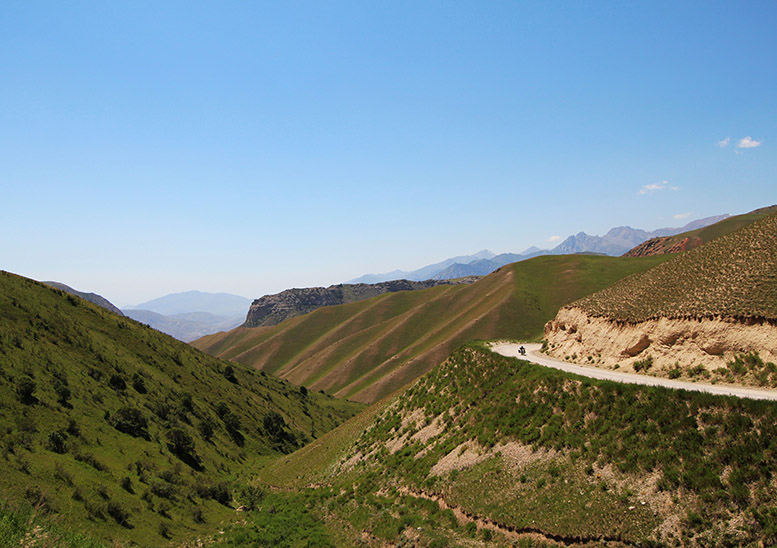 Tired of reading about the usual places to take a bike trip? Mad or Nomad’s Andy Davidson has the antidote – Kyrgyzstan. Let him guide you through the attractions and essentials to one of the planet’s hidden treasures…

Why would I go there?
Hidden from the world by the Tian Shan mountains, little-known Kyrgyzstan is home to the world’s last true nomads. Imagine a landlocked country in the heart of Central Asia. Surround it with lush green hills, rugged mountains and roads twirling their way into the clouds. Pepper it with thousands of horses and a sprinkling of white yurts filled with nomadic families and you have Kyrgyzstan. And what’s even better… it’s ridiculously easy to get in, visa-free for Brits, and renting an adventure bike is a piece of cake!

It’s a long-forgotten world and discovering it on a motorcycle is special – really special. It will give you a proper taste of what it is to be nomadic from people who have lived this way for thousands of years.

Where is it?
It’s a small, landlocked country in Central Asia bordering China, Kazakhstan, Uzbekistan and Tajikistan. It was once part of the USSR and became fully independent in 1991. It’s one of the ‘least known about’ countries in the world and many of its people still live a nomadic way of life in yurts in the high mountain pastures during summer and the plains in winter.

What is there to do?
Head to the city of Osh, rent a bike and make your way north to Lake Song Kol. You’ll find a real nomadic experience here surrounding the icy lake. There are plenty of yurt camps for you to stay in. You can swap your iron horse for a real one and set off solo into the hills for about £1.50 per hour. After, take the south east road to Bishkek for the mountain passes. Head to Issyk Kul lake and then back down to Osh. It’s about 1000 miles and involves plenty of off-roading. You’ll find a seemingly endless ribbon of mountain passes, surreal emptiness and jaw-dropping scenery. The off-roading is insane and perfect for adventure bike riders.

How do I get there?
Fly in and rent a motorbike in from Osh. There’s a company called MuzToo who rent Yamaha XT600s for around £60 a day. Prices include tools, spares and comprehensive insurance. You can opt for a tour instead if you don’t fancy going alone. Expect to pay £1700 per person for a complete package, including bike, servicing, hotels, food, support vehicle, insurance and kit. You’ll need five mates to book a private tour, or jump in on a mixed eight-person tour instead.

Derinkuyu is the one to visit: built around 780 it used to provide shelter from the ongoing wars. It’s humongous, eight levels deep and 200 feet below the surface. It could hold up to 20,000 people, had schools, livestock, libraries, churches and a complex tunnel system with locking doors and ventilation systems.

Know before you go…
Kyrgyzstan is the easiest ‘Stan’ country to visit. As Brits we don’t even need a visa. A bunch of countries (including the USA and entire European Union) get 60 days visa-free. Just buy your own personal insurance in the UK, book a flight and go for it!

Top Tips…
1. If you’re stopped by police – smile! Don’t give them any money, if you feel you must then negotiate and if you’re stuck pay a maximum of 200SOM (£2).
2. Don’t be put off by police and bribes, it’s a lot less than an on-the-spot fine in Europe!
3. Watch out for drivers, who are not used to bikes whizzing past. But don’t worry about them, we found the driving standard in Kyrgyzstan to be better than quite a few western countries.
4. With bike rental in Kyrgyzstan you will get paperwork that will allow you to ride into Tajikistan and Uzbekistan too.
5. Plan your route and pack food and water, as there are long stretches with no shops.

About the authors…
Andy and Alissa gave up their lives in the UK to travel round-the-world. They left on January 1 2018 and have just ridden 20,000 miles to Japan. Follow their adventures at www.madornomad.com or on social media as Mad or Nomad.