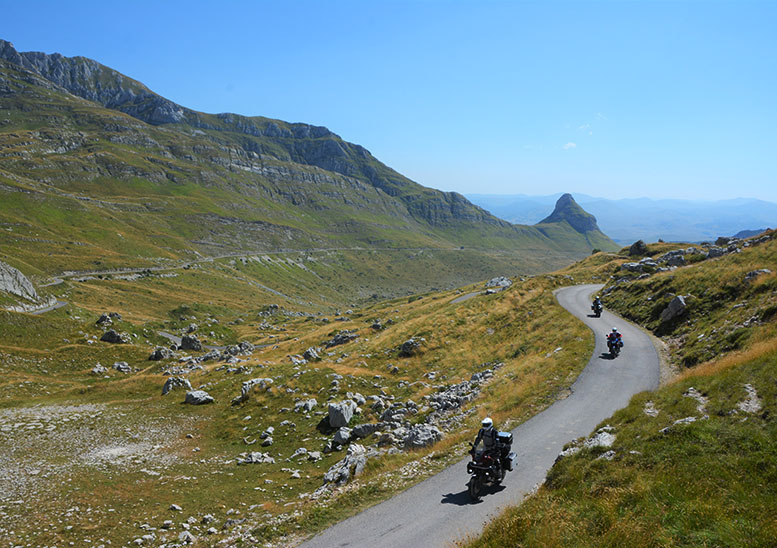 A biking destination growing in popularity is Montenegro; perfect for those who have ridden western Europe and want to go that bit further. Bike traveller Nathan Millward sings its praises…

Why would I go there?
Montenegro is still off the radar for most Brit bikers, mainly because it’s just that bit too far to get to in a short holiday period.

It’s a country worth making the effort for however, with some of the most striking scenery in all of Europe.

The name Montenegro means ‘Black Mountain’ and whilst not a big country (it’s about the size of Luxembourg) there are miles of well-surfaced mountain roads, breathtaking scenery and a fantastic coastline to boot.

It also borders Croatia and is neighbour to Bosnia, meaning you can string together a good sequence of interesting yet diverse countries en route.

One option to consider is freighting your bike to Sofia in Bulgaria with Bulgaria Bike Shipping and riding through Montenegro on your way back.

Another option is to ride down through Italy and catch the ferry from Bari across to the Balkans. Alternatively, it’s a 1500-mile straight line journey from London, which you could, if you’re keen, cover in three long days.

What is there to do?
Montenegro’s appeal is based on its mountains and coastline, not to mention its scattering of medieval villages and towns.

Durmitor National Park in the north of the country is one of the country’s highlights, with deep gorges accessed via some of the most engaging, twisting, mountain roads you’ll ever ride.

The road running east from Mojkovac to Zabljak is a highlight, as is the P14 that continues west from there in the direction of Pluzine. The latter is single-track for the most part and winds along the valley, through rocky crags and high-altitude pastures until you drop down through roughly carved tunnels to the brilliant blue waters of Piva reservoir.

There’s a zip-line to be ridden here as well as plenty of different watersports. The roads are quiet and generally well surfaced.

Not far from here is the route of the Trans European Trail (TET) as it passes through Montenegro. The TET is a series of off-road trails linking the countries of Europe that can all be downloaded as GPX files, with some of the best off-road riding to be found in Montenegro. You can find more on that here.

The medieval coastal town of Kotor is now popular with cruise ships so it can be a bit busy, but the old town is atmospheric and well worth a visit; think of it as a quieter alternative to Dubrovnik.

The Bay of Kotor is dotted with small beaches that make for easy swimming and above that towers Lovćen National Park, with a twisting mountain road to the summit giving amazing 360-degree views over Kotor and the rest of Montenegro.

The lively coastal town of Budva is also worth checking out, as is the old capital at Cetinje. Above all else it’s the riding that defines the appeal of Montenegro. It’s deeply varied with a sense of being ‘off the beaten track’, without being too far from a safe base or a high level of modern-day comforts. Away from the coast it feels in some parts to be practically deserted.

Know before you go…
Montenegro uses the Euro, they drive on the right and you don’t need a visa to enter. You must have a valid driving licence, as well as a ‘1968’ International Driving Permit (IDP).

For your bike, depending on your insurance company, you will need a Green Card. Very few insurers include Montenegro on their list of Green Card countries. It’s worth ringing around before renewing your policy to check which insurers cover which countries, with Serbia another country that varies by insurance provider. For Montenegro, chances are you’ll have to buy insurance at the border, which can be easy or difficult, depending on which border you cross at.

Crossing from Croatia on the coastal road there should be insurance booths by the border post. You need to ask for ‘granichno osiguranje,’ which translates literally to mean ‘border insurance’. It generally costs between 10 and 12 Euros.

Google translate is effective for communicating in such situations, although be aware that Montenegro doesn’t have free data roaming, so costs could spiral if you’re on your phone a lot. You should also take your original V5 document and for a breakdown policy the RAC extend cover to Montenegro under their Zone 3 coverage. Not all European breakdown providers cover Montenegro, so it’s worth checking before taking out a policy.

Best time to go?
The height of summer can be very hot across the Balkans and Montenegro, with temperatures often well over 30 degrees Celsius, although cooler in the mountains.

If that’s too warm for you then consider the shoulder seasons around May and June, or later into September.

The tourist season is also in full swing over the summer months and places such as Kotor can be quite busy, although not unbearably so. Relative to the hotspots on the Croatian coast, Montenegro is still quiet.