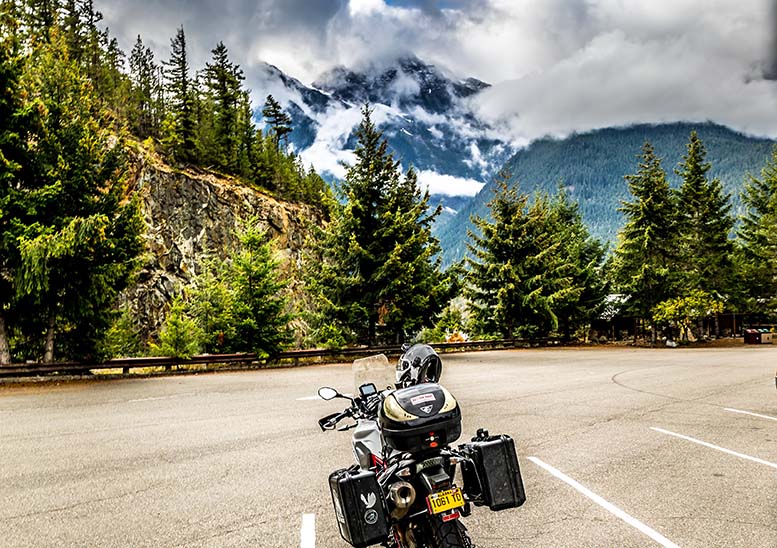 Let pro tour guide Felix entice you to take a riding trip around the Pacific North West, visiting all the key points in Washington, Oregon, Montana, Idaho and Wyoming…

Most who think about riding in the States gravitate towards the classic Route 66. That’s fine if you want to spend two weeks riding in a straight line on a Harley, but if it’s not your thing you need to get yourself to the Pacific Northwest of America.

What you will discover here blows anything you can find in Europe out of the water and then some. It’s bigger, better and more beautiful.

The amount of unadulterated space means you can ride for hours without seeing another living soul, across soaring mountain ranges, through deep gorges and lush forests with some of the finest natural scenery and national parks not only in America but in the world.

Located 30 minutes outside Portland, Multnomah Falls is the tallest waterfall in the state of Oregon. It was formed around 15,000 years ago when, according to legend, a woman sacrificed herself to save the people of Multnomah village from a plague by jumping from the cliff. After her death, water began to flow, thus creating the waterfall.

The waterfall is split into two major steps, with a footbridge above the lower cascade and walking trails through the trees to the top of the waterfall where there is an observation deck providing breathtaking views of the waterfall and the Columbia Gorge. It’s a great place to sit and have a coffee!

Stretching across Wyoming, Montana and Idaho, Yellowstone National Park is famed for geological phenomenons – mountains, lakes, forests and a vast array of wildlife roaming free all over the park.

Big hitters including Old Faithful, Mammoth Hot Springs and Yellowstone Canyon are worth the visit on the 200-mile Grand Loop. Riding in this area, it’s astonishing how many hot springs and boiling pools of sulphurous water there are, underlining how volcanically active the area is.

There are many animals to keep your eyes peeled for in the park, including bison, elk, bighorn sheep, wolves and bears.

Hailed as the ‘most beautiful drive in America’ by legendary journalist Charles Kuralt, the Beartooth Pass shouldn’t be missed. Starting from Cooke City and ending in Red Lodge it’s 68 miles of epic scenery and superb switchbacks at a dizzying 11,000 feet above sea level.

Heavy snowfall and inclement weather means the pass is generally only open from May through to October, however it can be closed at any time as the winds can get too strong for riding or even driving.

This road is technical with many hairpins and switchbacks, but it is difficult to concentrate solely on the road as the views that constantly surround you are really something to be rivalled. It’s far more dramatic than anything you can find in Europe.

Any road that has the sign ‘Winding Road Next 99 Miles’ is sure to be good. If you’ve seen photos of the sign and wondered where the road is then the answer is the Lolo Pass, which remains one of the top motorcycling roads in the US.

It’s one of the most beautiful sections of the Lewis & Clark Trail as it winds through the mountains of Idaho and Montana.

Starting off with gentle sweeping bends, urging you to open the throttle up a little, the road curves through the trees and past wild rivers.

But don’t let this lull you into a false sense of security, as further up the pass are some heavy-duty switchbacks with a closing radius that can catch you out if you’re not concentrating on the road.

This road’s relentless onslaught of beautiful scenery, great twisties and smooth road surface will have you grinning from ear to ear.

The North Cascades are home to many of our favourite things – waterfalls, glaciers, snow-covered mountains, alpine lakes and of course incredible roads. In an area full of the most iconic motorcycling roads in America, the Cascades come in and steal the show.

A series of hairpins and sweeping bends thrust you up into the alpine mountains through densely wooded sections, opening up every so often to reveal breathtaking views out to the endless horizon.

The moist climate and rich soil allows greenery to flourish, making the colours of this area so vivid that every colour stands out brighter than anywhere else, deep green trees broken up by bright blue glacier lakes; coupled with crisp, fresh air makes the Cascades a very special place to ride through. Completely natural and unspoilt.

Get your ESTA (Electronic System for Travel Authorisation) sorted for travel to the United States, it takes about 15 minutes on the internet and is valid for 90 days over a two-year period. You will not be let into the States without one. https://esta.cbp.dhs.gov/

Make sure your travel insurance covers motorcycle riding, and check it’s on bikes over 125cc.

In most states, an International Driving Permit (IDP) isn’t required by law. However, if you get pulled over by a state trooper as opposed to a local policeman and you don’t have one, they will probably take you to a police station to verify who you are – regardless of whether an IDP is compulsory there. So we suggest getting one just in case.

You can get an IDP at a Post Office and it only costs £5.50 at the time of writing – visit the Post Office website for more info. If you want to know which states do insist on an IDP, car hire aggregator Rhino Car Hire created a blog post with a handy map.

Depending on where you rent bikes from, most operators include the legal minimum insurance. However, Americans are famously litigious, so make sure you get supplementary insurance cover as well.

On bigger roads watch out for undertaking, which is legal on roads in the United States on dual-carriageways. Undertaking is perhaps the biggest culture shock for UK motorists using US roads.

While undertaking is legal, filtering (known in the States as ‘lane splitting’) is only legal in California.

Right turns at red lights: Treat these like you would a normal junction in the UK. You are allowed to turn right even if a traffic light is red, provided that there is no oncoming traffic.

Animals and nature: Now this is a big one, and something few people give any real consideration to when they travel from the UK. When riding in the States you will see wildlife – it will jump out in front of you at some point and it will be bigger than you expect! On Magellan trips we’ve seen elk, bison, bighorn sheep, deer, porcupines, racoons, bears and much more.

Best time to go?
Aim for August and September to get the best weather, it’s also a good time for spotting animals and the passes are generally open. Try to avoid Labour Day, a national holiday in the States that occurs at the beginning of September, as it can get busy!

1. National Park passes are required for all travel through national parks, if you’re intending on visiting more than one it’s cheaper to get an annual pass. They do discounted passes for couples, which are fine to use if you and a friend have a motorcycle each. So long as you ride in and out together you can use one pass. Don’t worry, you don’t need to hold hands!

2. You will need to go to the counter at gas stations to pre authorise the amount of fuel you want to buy – you can’t fill up then pay! Rule of thumb – $10 for half a tank and $20 for a full tank. Any excess credit will be automatically debited back to your card – you don’t have to go back in once you’ve fuelled up.

3. In the state of Oregon, fuel must be pumped by an attendant; they are very strict about this with cars but a bit more relaxed with bikes. Play it by ear when you arrive at a gas station.

4. A Caxton FX card https://www.caxtonfx.com/ is great as it’s a preloaded currency card, which is great for fuel stations etc…

5. You’ll need a credit card rather than a debit card for hotels as they will pre authorise an amount to cover incidentals, even if you’ve pre-paid for the room. On a credit card the authorised amount will be lifted within 24 hours. If you use a debit card they will have to withdraw the funds and then send them back, which can take quite a while – and can potentially get you in a pickle.