Davide Brivio: How to run a MotoGP team 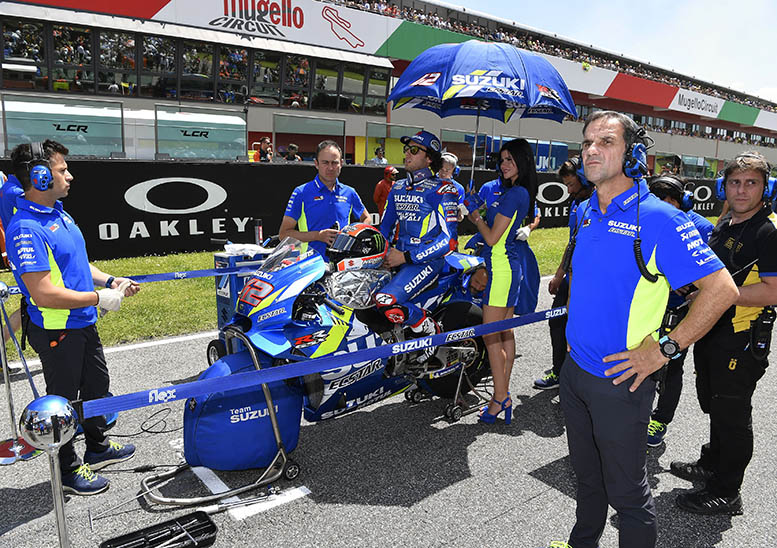 Davide Brivio: How to run a MotoGP team

If you want to know what it takes to run a MotoGP team, there are few better people to ask than Davide Brivio.

The Italian masterminded Suzuki’s return to MotoGP competition in 2015 and has guided them back to the top step of the podium with former rider Maverick Vinales and current ace Alex Rins.

Before establishing the Suzuki operation Brivio spent almost 20 years with Yamaha, including running Valentino Rossi’s side of the garage..

In this exclusive interview with SBS Mag, Brivio explains what it takes to be a manager of a front-line MotoGP team….

Luck plays its part
“To run a team you have to be a lucky man, and that’s how I feel.

“It was my dream when I was a kid to be involved in racing. I like motorcycles and I tried to race myself, but I was not fast enough, then I had an idea about maybe being a mechanic but I ended up doing something else because I am not so good with manual things.

“It was my dream to be involved in the racing somehow – I didn’t know how, so from the point of view I am fortunate.

“I enjoy my job very much and to create something, to be able to make choices and take decisions on which way to go is a big responsibility that is also exciting and interesting.” 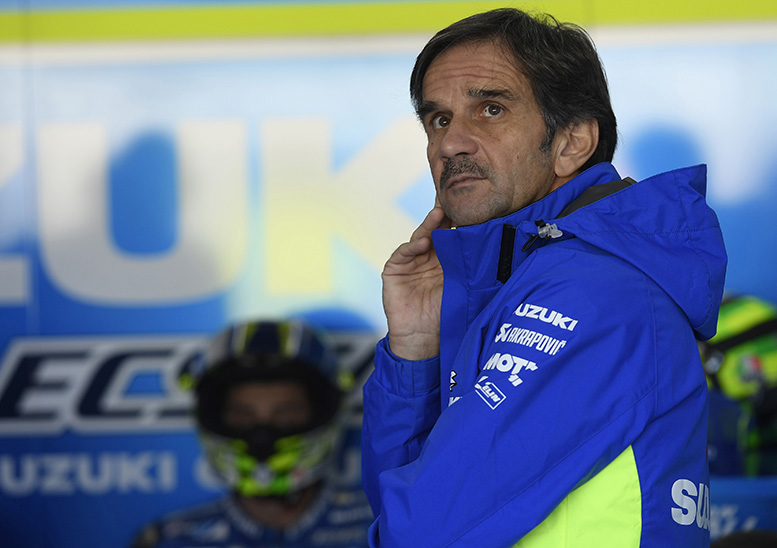 There is no hiding place
“In every sport the competition keeps you alive and gives you a lot of adrenaline, even if you are not one of the athletes. You can be behind the scenes, but you feel part of the action. You feel the emotions the riders feel and working in the sport is fantastic from this point of view.

“I call it work, but at the end it is not really work. It has moments of stress and big tension, but it is difficult for me to consider it a job.

“At the end of every race and the end of every year there is a clear sentence – you win or your lose. There is no excuse, pretty much. If you have a normal business perhaps you didn’t reach your sales target or you didn’t reach some results you can find an excuse like the weather was bad, the market was down or the customers went on holiday. In sport, you can do that but it doesn’t count. That’s the difficult part, but also the exciting part.”

You have to be prepared
“When Suzuki said they wanted to come back to MotoGP they showed some interest in getting me involved, but this took weeks and months of keeping in contact. Then one day I had an interview with the project leader and the people in charge at that time. I showed them a long presentation and soon afterwards they said I could start to work.

“The exciting part was that there was nothing. We started from a white paper; Suzuki in Japan did that to build the bike and we did the same to build up the team. That was exciting and interesting.

“At the beginning we had three guys who’d been involved in Suzuki’s previous team. We needed a base and I was living in Italy so we created the base there. Then we started to decide what we needed to buy and how many people we needed.

“That was April 2013 and the idea was to test until December and then enter the 2014 championship. Then we had a delay because we didn’t feel ready to go racing. We tested all year in 2014 but we set up the base, the workshops, bought the tools, crates and equipment, so we created the team slowly.

We looked for people who were hungry for good results

“On one side we were developing the bike and on the other side we were building up the team. Then when it was 2015 and time to enter the championship we hired more people and we started racing.”

“We always tried to involve people with enough passion for the challenge. We knew we could have some difficult times because when you start with a new bike, maybe it is not competitive or you get failures so it can be difficult for the staff to go without results and rewards.

“We needed people who were motivated enough to get through the hard times before they got the satisfaction. We looked for people who hadn’t achieved good results yet and were hungry to get them.” 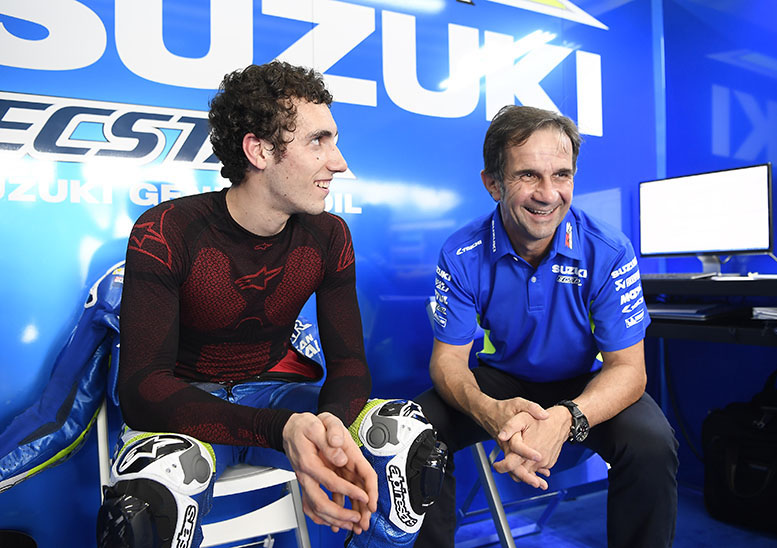 …especially those onboard
“With the riders we took a gamble. We took Aleix Espargaro. He was already an expert but had always been in a private team, so it was a golden opportunity for him to be in a factory team, something he always dreamed of.

“Then we chose [Maverick] Vinales, who was in his first year in Moto2. At the beginning we proposed to him that he joined the team in 2016, after spending two years in Moto2. But he wanted to be involved with MotoGP as soon as possible and he went into the team in 2015. That was a challenge as he was a rookie.

“So we took an expert guy to develop the bike and a rookie with talent who could be a successful rider. It worked and was a good team.

“Vinales decided to go to Yamaha and we did the same again with Alex Rins, restarting with a rookie and becoming successful. This is another exciting part of the job to see a young rider growing up.

“We went through some difficult times, but I am happy to say we were right to go with Alex. He is clearly a talented rider who has achieved podiums, won a race, and is a top rider for the future. We hope now to continue to work with him for as long as possible.”

Enjoy the good times
“The rewards of the job depend on your target. The reward is to reach that target, and that is exciting. The other side of the coin is that when you win one race you want to win a second, then it’s ‘what about the next?’. It’s a never-ending story, but that’s the core of the sport. 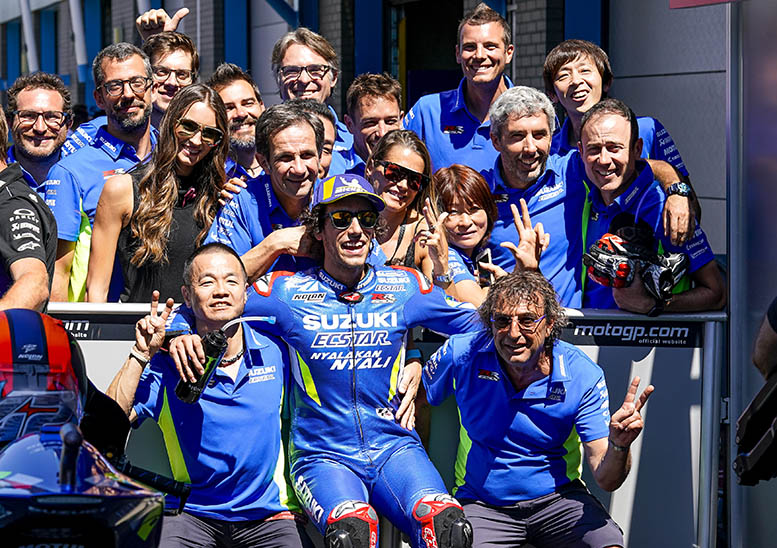 “In my previous experience I worked with Valentino Rossi and we won many races and titles. Winning a race was not an exception for us; it was a target every weekend. Once we won a race, after one or two hours we would think about the next and how we could win it. It takes very little time when you are in that situation.

“In our situation now I would say we enjoy it a little more, maybe it takes a few days before we think about how we are going to win the next one.

Always look ahead
“We grew up slowly, got into the top 10, started to dream of the podium, then won a race. We’ve done that and now we want to be a championship contender.

“That is the most difficult target, but that’s why we are here. MotoGP is a difficult game. You get strong riders, experienced manufacturers and strong teams so you always have to be creative and find some way of getting an advantage. Every day we are thinking of where we can improve and what we can do better.

“Our ambition is to win the championship, but it’s not so easy.

“We are already in the fight. This year Marquez has a big advantage and is the guy who has the biggest chance, but for the first part of the season we were very close. That was good experience. Now we have to recover as much as we can and we want to try and get in the top three. Our target is to finish as close as possible to the top position.

“Our bike is growing up, Alex is getting more mature and our job is to be in that fight.”