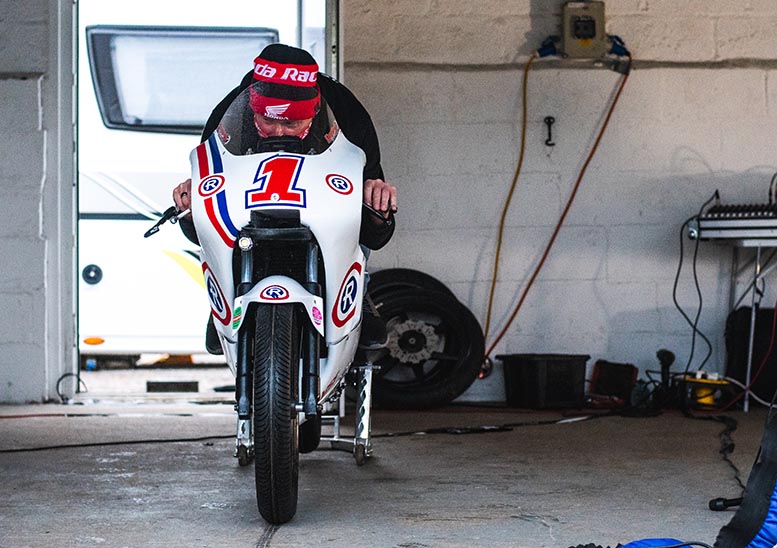 Mallory Park possibly shouldn’t be this busy at 8am on the last day of October. But this isn’t just any old October Saturday, this is the final round of the Freetech Enduro season.

The Freetech championship is relatively new, but it’s picked up pace at a frenetic rate. Today there will be 92 low-capacity bikes all hoping to survive a six-hour thrashing around the chicane-laden Mallory circuit.

The bulk are 125cc four-strokes – Honda CBR125s, Yamaha YZF-R125s, Suzuki GSX-R125s and the like. Throw in some 50cc two-strokes, sprinkle on some vamped Honda C90s and you have the ingredients for today’s racing soup.

Among them is a Honda CBR125 with discreet looks that hide a multitude of technological advances. And one of its riders is Glen Hindmarsh, a former pro motocrosser who now works in the Sportsbikeshop warehouse.

The SBS Mag crew are hiding in Glen’s garage, dodging the rain and absorbing what happens as he and his illustrious team-mate – former British Superstock champion Hudson Kennaugh – chase the championship.

Hudson is also the organiser responsible for the runaway growth of the Freetech series, and he and Glen lead the overall championship coming into today’s final race. So let us say ours aren’t the only eyes trained on the progress of Glen, Hudson and their Team Brenda outfit.

As Hudson divides attention between running his series, his team and the need to stick in a fast qualifying lap as a rider, he sends Glen out into heavy rain to begin the 45-minute practice/qualifying session.

When they swap, Hudson heads out and Glen’s immediate briefing on the freshly-rebuilt CBR engine isn’t encouraging. “We haven’t got any straight-line speed at all,” he says with a grimace.

Still, Hudson sticks in a fast enough lap to qualify 16th for the Le Mans-style start. It’s not great, but it could be worse. Rivals Team Suzuki qualify down in 42nd.

There’s just time for a sprocket change and a fuel top-up before the craziness of a 92-bike Le Mans start. Hudson’s first away for Team Brenda, skating off onto a surface so soggy you could confuse it for Mallory’s adjacent fishing lake.

Delaying their first rider change to the very edge of the 35-minute maximum rider stint means he gets a clear track and briefly gets up to third place. By the time he hands over to Glen and our man crosses the line for the first time, Team Brenda are running eighth.

Team SJL, the other crew hoping to deny Team Brenda’s title tilt, are already out of the running so it looks like a straight fight with Team Suzuki’s GSX-R125.

Team Suzuki have brought in current British Superstock racer Tim Neave to bolster their chances of success. His opening stint has taken the Suzuki boys from 42nd to first, but his team-mates can’t match his pace and they settle back into fourth.

Seventh place at the end of today will make Team Brenda’s points total unassailable. Team Suzuki know they have to shoot for the win and leave the rest up to luck.

As the teams stop for a one-hour lunch break that’s enforced by Mallory’s operating restrictions over noise, Team Brenda are fifth and Team Suzuki are third. If it stays like this, Brenda will be crowned champions.

Suzuki up the pressure. They give maximum track time to Neave and reduce stint frequency for his team-mates – YouTube sensation Al ‘44T’ Fagan and Fast Bikes mag editor Bruce Wilson.

He's not been round, must have crashed

Brenda respond, shortening Glen’s stints so the faster Hudson gets more track time. Still, with just an hour remaining, they sit in sixth place. It’s enough to win, even if Team Suzuki move up from second to win the race.

The pitboard is out to tell Glen to come in. Hudson gestures at the crew giving Glen’s signals. He wants to know why Glen hasn’t come in. So do they. Glen acknowledged the board when he last passed. They’ve not seen him since.

It dawns that something has gone wrong. “He’s not been round, must have crashed,” says one of the Team Brenda crew, preparing tools to repair the damage.

Glen appears at the end of pitlane, pushing the stricken CBR. He hasn’t crashed; the bike has let go in spectacular fashion. Photos and videos later show plumes of smoke emerging from the exhaust and an inspection of the spark plug shows there’s terminal damage inside the engine.

Team Brenda’s position in the race is falling by the second. They contemplate swapping an engine, but they’re 27th in the race, outside the points, and even a world record pace engine change can’t save them.

They admit defeat. They face the prospect of months of work in the workshop and the gym ending with a runners-up trophy. Glen quietly escapes to the back of the garage block, lost in thought at what could have been.

Team Suzuki now know fourth place in today’s race will see them leap ahead of Team Brenda and take the championship. They’ve been running in second since lunch and only need to stay where they are to wrap it up.

A disconsolate Glen finds the heart to return to pit lane and watch as Neave rips out fast lap after fast lap to move his Suzuki team into the lead.

Glen and Hudson both graciously congratulate Team Suzuki. And immediately they start plotting to take their title off them in 2021.

To find out more about Freetech Endurance racing, visit their website here.