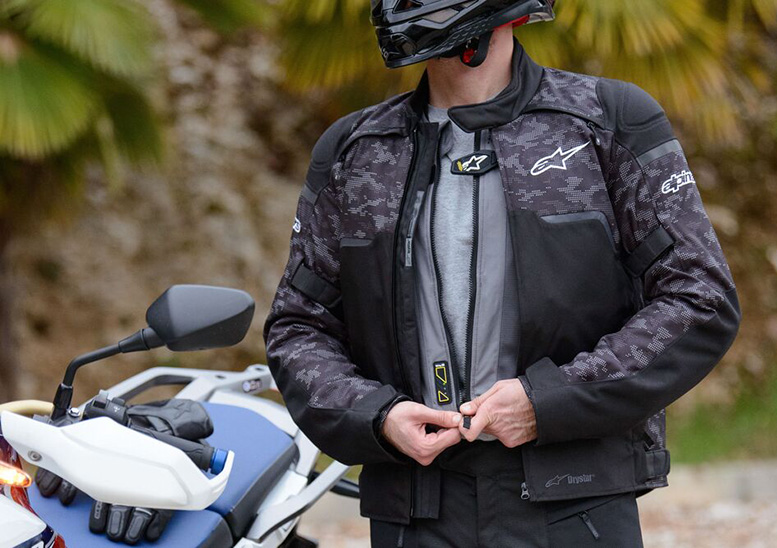 Alpinestars’ new wireless airbag has been developed using research from top-flight MotoGP racing. And now it’s coming to a road near you.

The biggest advantage of the Tech-Air 5 airbag is that it can be worn under any motorcycle jacket from any brand, making it accessible to all riders rather than being restricted to those who wear Alpinestars jackets or suits.

Riders who want to wear it under a ‘normal’ jacket rather than an airbag-compatible one should make sure there’s four centimetres of space between the body and jacket to accommodate the airbag’s inflation.

Most riders wear textile jackets more loosely so there should be enough room already, but the tighter fit of a leather jacket means riders will possibly need to go up a size to give the 4cm of space.

Airbag-compatible jackets, whether that’s from Alpinestars’ Tech-Air range or another manufacturer who uses airbags, have stretch panels that allow it to expand with the airbag so riders can stick with the size that fits them best and not worry about expansion room.

Tech-Air uses data from six integrated sensors – three accelerometers and three gyroscopes – to monitor body position and acceleration. This data is run through a crash detection algorithm, developed by analysing data from MotoGP racers and Alpinestars customers, and if it recognises a crash scenario the airbag will inflate around the rider’s shoulders, chest, ribs and back in a maximum time of 40 milliseconds.

To arm the airbag, riders simply zip up the vest and close the magnetic tab at the top. An LED display on the bottom of the vest will show the airbag’s operational status.

If the bag deploys, afterwards riders will need to take the Tech-Air 5 to their Alpinestars dealer, who will send it to Alpinestars to have the air canisters replaced at a cost of £249.99. Alpinestars will also analyse data from the crash that activated the airbag, which may then be used in future updates.

The Tech-Air 5 is equipped with a lithium ion battery, which can tackle 30 hours of riding time before needing to be recharged via the supplied USB cable and charger.

Connecting the system to the Tech-Air app via Bluetooth allows riders to view the operational status, battery level and data from rides. Route plotting and ride recording are two of the niftier features the app offers, and the firmware for the airbag system can also be updated through the app.