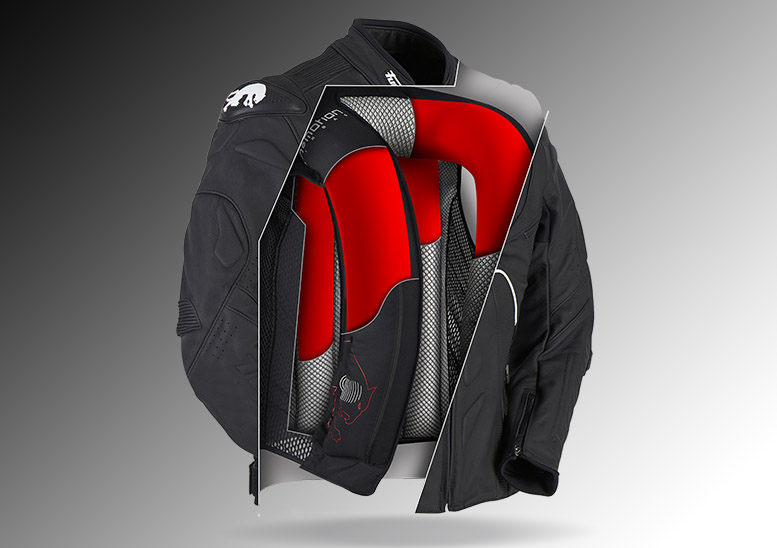 Furygan are one of the big clothing names to join the airbag revolution in 2020.

Their Fury Airbag is a vest that can be worn under any 2019 or 2020 Furygan Airbag Connect suit or jacket to bring MotoGP-style protection to road riders.

It connects inside those garments, or alternatively can be zipped in place of the thermal liner in any Furygan leather jacket.

It uses the In&Motion technology that’s also being used in RST’s new airbag-equipped jackets, which uses onboard sensors to detect a crash scenario and deploy the airbag.

The brain inside the In&Motion unit detects the rider’s position 1000 times a second as they ride, to detect whether all is normal or if things are getting out of hand.

If it’s going wrong the unit triggers and within 60 milliseconds of deployment the airbag inflates around the rider’s neck, back, chest and abdomen to give them protection way beyond the capabilities of traditional armour.

In active riding mode it will run for up to 25 hours from one three-hour battery charge, and will sit in standby mode for 15 days on one charge. Two detection modes are available, one for road and another for the more demanding track environment.

Furygan’s marketing manager David Robert explained: “Braking on a MotoGP bike from the long straight at Mugello causes the same force and level of deceleration as a scooter hitting a car at 50kph (30mph), so it’s important to tell the computer what it should expect as ‘normal’.”

Unlike systems such as Dainese’s, the In&Motion system is easy to recharge after a deployment. It comes with a screw-in inflator, which keeps the airbag inflated after an accident until it is unscrewed.

Getting the Fury Airbag up and running again after inflation and deflation involves replacing the inflator at a cost of £89.99, a job that’s done at home rather than requiring return to a technical specialist.

The Fury Airbag itself will be available in the UK for £379.99, obviously without the cost of the leather jacket or suit around the outside. It includes the In&Motion brain unit, which isn’t included with RST’s equivalent, but the inflator unit is sold separately at the £89.99 price listed above.

Furygan’s media release lists the Fury Airbag as available now, so look out for its imminent listing on Sportsbikeshop.