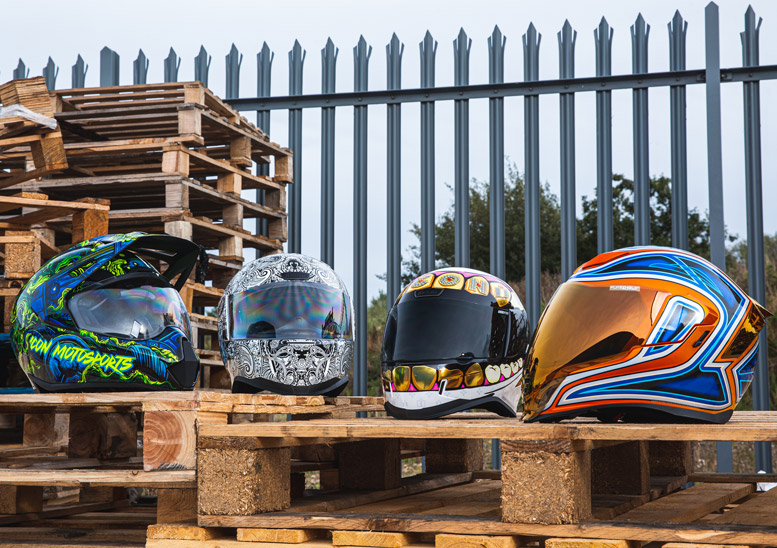 In an uncertain world there’s one thing we can rely on: Icon and their wild helmet designs.

As they launch their 2020 autumn collection of designs, we take a look at some of the highlights…

Icon’s aggressively styled Airflite receives a host of new graphics. Peace Keeper (RRP £255.99) comes in matt black or matt white and can be paired with an RST Gold visor (included in the box) for the ultimate video game character look. If that’s not your thing, the lid also comes with a clear visor. Swipe through the images below to see the Peace Keeper range in all its golden glory.

The El Centro graphics have an RRP of £249.99 and come in either black/gold or blue/gold. The background colours on both variants have a shimmer finish, and both lids have contrasting bold lines and are finished with gold spoilers. RST Gold visors are also included along with a clear visor. See the El Centro graphics below.

Lastly, the Crosslink graphic combines a matt black backing colour with bold, orange/red stripes and a complementing RST Red spoiler and inner sunvisor. Unlike the other new schemes on the Airflite, there is no additional coloured visor included in the box, though one can be purchased separately for £49.99. The Crosslink graphic launches at £239.99.

The Airflite features a distinctive visor that drops down over the chin vents, an internal sunvisor and a HydraDry moisture-wicking lining. The standard visor isn’t Pinlock-ready, but a Pinlock-ready visor costs an extra £39.99 in either road-legal or race trim, plus a further £33.99 for the insert.

The Airflites are available now in sizes XS-3XL.

The Airform is one of Icon’s newest lids, featuring an internal sunvisor and internal recesses for intercom speakers, but with a sporty profile and rear spoiler. All graphics are available in XS-3XL.

The new Chantilly designs come in gloss white or matt black (RRP £164.99) or two opalescent graphics in blue or purple. All colours feature an intricate lace-styled design with skulls subtly worked in on each side.

The Buck Fever graphic carries an RRP of £164.99 and is inspired by deer hunting, with cans of beer scattered all over the lid, deer antlers on the top and a ‘resident deer tag’ hunting licence on the back. It comes fitted with a dark smoke spoiler, though the spoilers on the Airform are interchangeable and new colours can be bought from £13.99.

Arguably the gaudiest of the newest Icon releases, the Grillz allows riders to channel their inner ’90s rapper through shining gold teeth complete with 3D ‘jewels’ spelling out ‘Icon’. On the back, a gun-toting character wearing a crown waves his pistols in the air. The predominantly white lid is finished off with a gold spoiler and a dark visor, which is included in the box.

Taking the nickname of the burning M34 grenade used by US Forces in Vietnam, the Willy Pete graphic features clouds of blue and green smoke erupting from a grenade on the chin. The text ‘Icon Motosports’ dominates each side of the lid, and it’s finished off with a glow-in-the-dark effect. A dark visor is also included.

The Variant Pro is Icon’s leading adventure helmet and is made from a mix of fibreglass, carbon-fibre and Dyneema. The inner lining is removable and washable and the visor has been treated with anti-fog to help stop it steaming up.