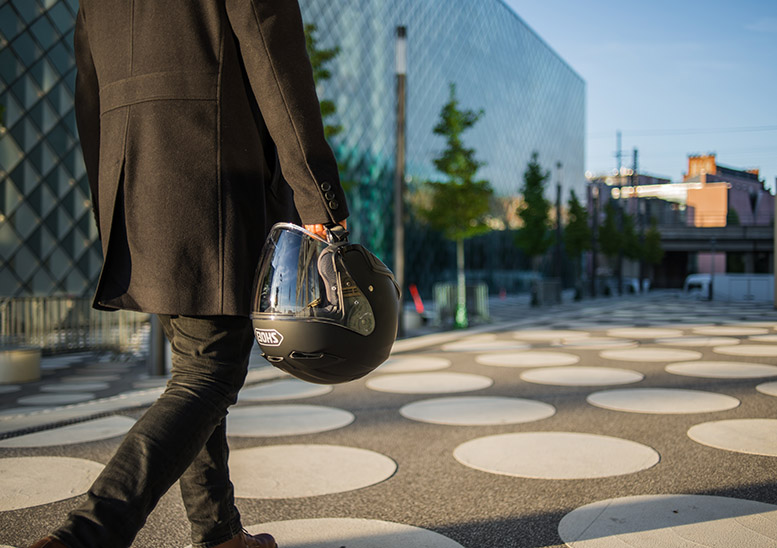 Shoei’s new 2020 open-face city and touring helmet is heading down a similar revamp path to the one trodden by 2019’s GT-Air II.

The J-Cruise II has a host of updates in line with the full-face GT-Air II, including a new sun visor, interior and improved aerodynamics and ventilation.

It’s also easier to integrate a communications system as the new J-Cruise II is prepped and ready for either the SRL1 or SRL2 Bluetooth units from Sena.

The new QSV2 sun visor is the same as unveiled for the GT-Air II, which is 5mm deeper for extra protection from glare, with a deeper recess in the centre to reduce the chance of it interfering with the rider’s nose.

A new cutout for the operation switch is considerably smaller than on the original J-Cruise, which Shoei say contributes to a quieter ride.

A new interior is covered with two different materials – a moisture-wicking fabric is used in areas like the brow and temples, where riders are more prone to sweat gathering. Then areas such as the lower part of the cheekpads, which are more likely to abrade against the skin during removal and refitting, are softer for more comfort.

Shoei claim impressive aerodynamic benefits over the outgoing J-Cruise, with a more modern shape reducing drag by 1%, a 7% cut in lifting forces and a hefty 43% drop in the amount of yawing forces trying to push the helmet from side to side.

Adding a third air intake on the upper section of the shell allows 30% more air to flow into the helmet when the vents are open, according to Shoei’s wind tunnel testing.

Combined with a reshaped outlet at the rear of the shell, Shoei say the revisions increase the amount of air flowing out of the helmet by around 20%.

The CJ-2 visor remains from the previous model, but it butts up to a revised trim to ensure a better seal and reduce the amount of air and water getting past. It also locks against a tab on the shell to stop it lifting without the rider’s say-so.

While the visor itself may be unchanged, it’s attached to a revised baseplate that now allows the visor to be opened slightly to clear misting. For increased protection against fogging there’s the option of a Pinlock Evo insert that’s available separately.

The new lid will boast four shell sizes; the smallest covers helmet sizes XS and S, medium and large both get their own shell size and the largest shell is shared across helmet sizes XL and XXL.

Five plain colours – white, matt or gloss black, grey and matt blue – will be joined by seven different multi-colour designs shown in the pictures. Prices start at £429.99 for plain white or black while grey and blue are £449.99 and graphics will be £519.99 at launch. They’re expected to arrive in the UK early in 2020.