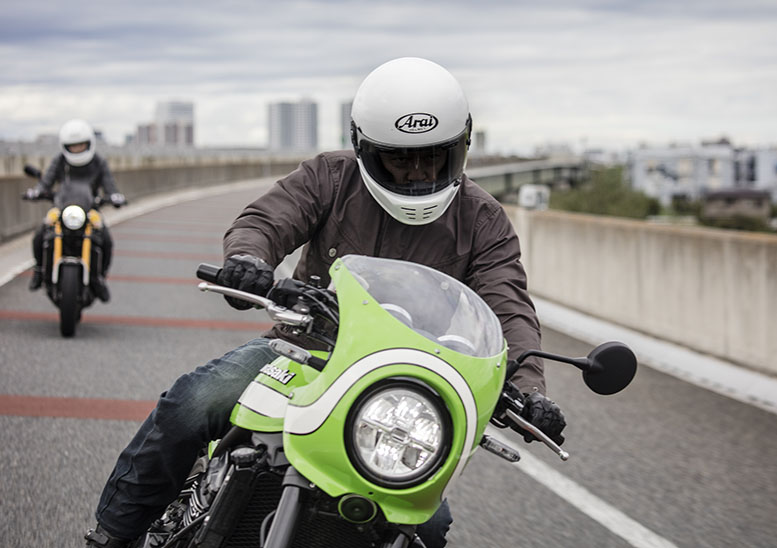 There weren’t just bike manufacturers displaying their latest releases at EICMA this year. SBS Mag walks you through the newest bike gear taking centre stage at this year’s show.

Used in MotoGP and now coming to the road, the AGV Pista GP-RR is the same lid used by AGV racers, including Valentino Rossi. This FIM-homologated helmet has a carbon-fibre shell, which AGV claim contributes to a 1450g weight (in the smallest shell size). It comes complete with a hydration system, multiple ventilation points, a removable aerodynamic spoiler and Pinlock visor. Prices for the Pista GP-RR will start from £999.99 for plain carbon, rising to £1399.99 for a Rossi replica. Want more detail? Click here for the complete story.

AGV’s newest lid promises to be able to hold up to any kind of riding. With the visor mechanism reduced in size and a five-layer EPS, AGV claim the all-new K6 is 46% safer than required by legislation. Its Ultravision visor is handed down from the top-of-the-range Pista GP race lid and offers a better field of vision than its predecessor. Find out more about the AGV K6 here.

The Arai Rapide harks back to helmets of the ’80s in its retro styling, but keeps Arai’s safety-first approach to lid making. It’s been available in Japan for a while as the Rapide Neo, but finally hits UK shores in late 2019 in a series of both bright and plain colours. The Rapide takes on the brand’s signature round shell, and includes six meshed chin vents, which can be closed. Read more about the Rapide here.

A number of brands are dipping their toes into the airbag pool, with Furygan releasing the Fury zip-in airbag and Dainese introducing the standalone Smart Jacket.

But they aren’t the only ones. RST have developed a series of more affordable kit with integrated airbags, from race suits to adventure jackets, as a partnership with airbag manufacturer In&motion, the same people behind the Furygan kit.

Held have also teamed up with In&motion to create the Held eVest Clip-In, which attaches into any Held jacket using their clip-in technology and doesn’t require any connection to the bike.

Adventure specialists Klim are the fourth company to announce a new tie-up with In&motion to release airbag tech, while Ixon’s partnership with In&motion has been underway since spring 2019.

HJC are introducing a new mid-range sports-touring helmet for 2020. The F70’s fibreglass shell houses an internal drop-down sunvisor that’s operated using a slider on the left-hand side of the lid.

A large chin vent and two vents on the forehead, teamed with two exhaust vents on the back, make sure cool air is constantly flowing, while a Pinlock visor (insert included) prevents unwanted misting up. The anti-bacterial inner lining is removable and washable, as well as moisture wicking.

The F70 will also be compatible with HJC’s new ‘Smart HJC’ intercom powered by SENA, which is sold separately. The lid will be available in a range of plain colours and graphics, starting at £229.99. Read more about the F70 here.

Riding gear is about to get seriously clever. Ixon’s new Intelligent Heated gloves keep the temperature of your hands regulated without you having to do anything while you’re on the road.

Simply download the Clim8 app and pair the gloves with the app via Bluetooth. Once paired, put the gloves on and sensors inside calculate your ideal body temperature, which is remembered by the system.

While you’re riding, the gloves automatically start heating when your body temperature drops below the temperature stored by the app, and cuts off when you reach it. This means you stay in a constant state of warmth, though it can be overridden through the app if you’re getting too toasty.

The Ixon IT Aso gloves will be available from November, and will be supplied with two batteries and a charger. Read the full story here.

It’s not just about electric motorcycles, it’s also about electric riding kit. German brand iXS are teaming up with Hydro_Bot, who make jacket inserts which contain electrical impulses to remove sweat. Hydro_Bot has previously been available in skiing, but iXS will be the first brand to incorporate their technology into motorcycle kit.

At the touch of a button, the Hydro_Bot’s electrical impulses (running inside panels hidden on the back) draw out moisture from the jacket and expel it, leaving the rider cooler and without that sticky feeling. iXS say this technology will be available in their Montevideo touring jacket from 2021.

The retro comeback continues with Shoei’s 2020 addition of the Glamster. The styling is every inch old-school, from the shape of the lid to mesh-backed vents and the vintage-style Shoei logo. But the Glamster draws on the brand’s NXR sports helmet for its visor locking tab and Pinlock Evo anti-fog insert to keep things modern. Read about the Glamster in full detail here.

The X-803RS Ultra Carbon takes features from the existing X-803 Ultra Carbon, such as the lightweight carbon shell, emergency cheekpads and race-inspired ventilation. On top of that, the X-803RS has a clear race-styled aerodynamic rear spoiler and X-Lite’s LPC adjustable inner liner, which allows the rider to alter the position of the liner for their head using a strap on the neckroll. The track-focused X-803RS Ultra Carbon will be available in plain colours, as well as graphics and replicas including Alex Rins, Casey Stoner and Danilo Petrucci. Replicas will launch at £579.99, while the plain carbon and carbon graphics will carry an RRP of £479.99.

If you want the pinnacle of glove production you seek out Held, and the Titan RR will be their new range-toppers. They move the game on from the outgoing Titan Evo, with a new two-piece titanium knuckle protector for more flexibility, as well as titanium protection for the fingers and the outer edge of the palm. Kangaroo leather is used throughout, with panels of stingray skin to provide abrasion-resistance without the tendency for the material to grip against the road on contact. Another big innovation is the ‘step seam’ on the back of the fingers. This seam runs centrally along the length of the fingers, relieving pressure on the rider’s hands. They’ll be available in a selection of colours in the new year at a price to be announced.