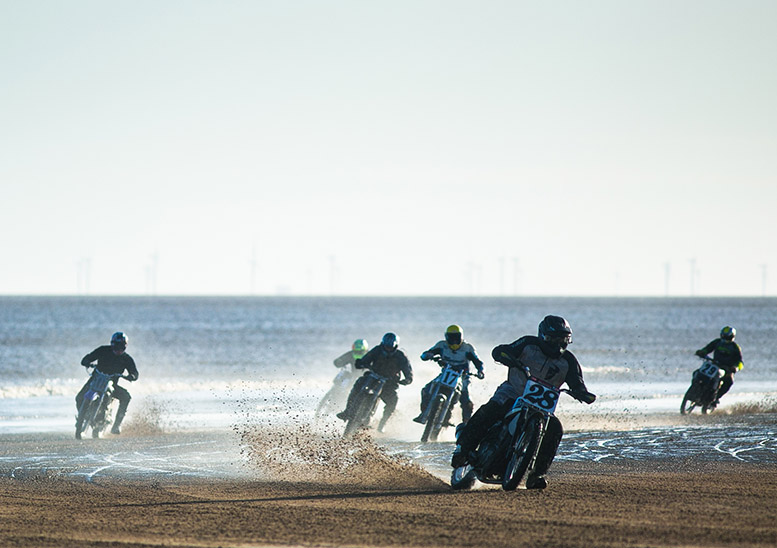 The whistle sounds and everyone gathered on Mablethorpe’s south beach knows what that means. We’re about to go racing.

It’s a Sunday in the depths of the 50th winter of turning sandy circles in this Lincolnshire outpost. Stakes have been knocked into the sand, the scoring caravan wheeled into position and the elastic starting tape readied.

After a well-observed riders’ briefing we’re into three-lap practice sessions followed by a quickfire series of four-lap sprints around the beach.

The smoother the process, the more racing there is for everyone before the tide washes away all trace of the race.

Three races for juniors, four classes for lightly modified road bikes and an outing for the lone grasstrack bike to make it to today’s startline are topped off by three motocross classes. Then the cycle starts again. Repeat five times and we’re done.

Veterans pack away their stuff, first-timers wear giddy grins that suggest days at the beach have changed forever. Visitors sit back and enjoy the entertainment as vans attempt to scramble off the sand and up the slope to terra firma.

It’ll start all over again in another two weeks, and every other Sunday till late March. All being well, the whistle will sound on another Mabo season next October.

Other one-off beach races still happen, and Pendine Sands in Wales regularly hosts speed runs, but all other beach racing series have long since gone. Mablethorpe needs to be savoured while it still exists.

Enjoy regular SBS Mag photographer Adam Pigott’s pics from the day. And get yourself out to Mablethorpe for your own slice of the action. You’ll find dates and info on the club website.