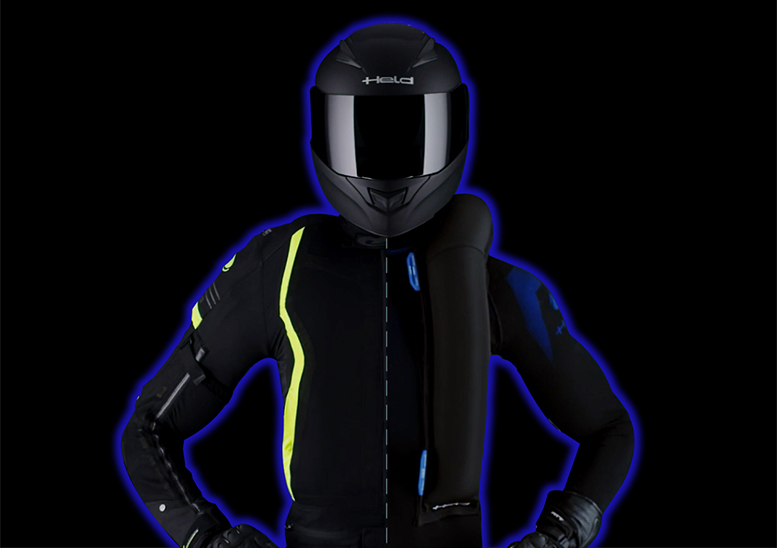 If the hype around show season was accurate then 2020 is going to be the year of the airbag.

We’re not talking about the traditional lanyard airbags that deploy when rider and bike part company, these are data-driven ones that inflate if onboard sensors detect a crash in progress.

And they’re all arriving at a similar price to the lower-tech options that need rider and bike to be connected.

Dainese are releasing their D-Air Smart Jacket, which can be worn under or over any bike jacket with enough expansion room, regardless of manufacturer.

Alpinestars, never normally too far behind, are promising a new standalone bag based on the work they’ve been doing with Tech-Air since 2015.

On top of that, four serious players in the bike kit world have agreed new partnerships with tech company In&motion, whose existing tie-up with Ixon is already a year old.

So that gives seven different choices of data-driven airbags in 2020. Here’s what you need to know about the options…

It was Dainese who started all this. They mounted accelerometers into their sponsored riders’ suits and collected swathes of data as they raced around the world’s circuits.

By analysing this data, particularly the stuff recording during crashes, they could map the anatomy of a racing crash. A D-Air suit effectively knew a rider was crashing before they parted company with his bike or hit the deck.

Fit an inflatable airbag, hook the detection system up to a firing trigger and voila – the airbag racing suit.

Next came the project to create a road-going equivalent, which has so far been integrated into high-end Dainese suits and jackets.

The new D-Air Smart Jacket is a standalone jacket that comes with the detection sensors, triggering kit and the airbag. At £569.95 it’s priced to compete with lanyard-fired systems.

Dainese say it can be worn under or over any outer jacket and it will inflate to protect the back and chest.

The outright cost is higher than other options on the market, but unlike most other options it includes all the technology so there’s no need to lease or buy that.

If a rider has a spill and the airbag inflates, it will gently deflate of its own accord afterwards. Then the rider needs to return it for inspection at a D-Air service centre, of which there will be a series in the UK.

The service centre will check the integrity of the jacket itself, and replace the inflatable section within it, which will cost £219.95 at the time of writing.

There’s expected to be a 48-hour turnaround time on the service, so riders can get back on the road quickly if they’ve escaped unscathed from their spill.

You can read our full report about the Dainese Smart Jacket here.

Pros
ᐩ Dainese are the airbag pioneers and have most experience to fall back on.
ᐩ It can be worn under or over any bike jacket that will fit over or under it and has enough expansion room.
ᐩ One-off purchase cost with no need to lease/buy extra tech.

Cons
− The airbag sections are single-use and require replacing after each inflation.
− Higher initial purchase cost

Full info is yet to be released on a new standalone airbag from Alpinestars, which is expected in spring 2020.

They showed a new t-shirt-shaped airbag set-up at the EICMA show in Milan, which has its own zip and looks like it is designed to be worn under any jacket with enough expansion to cope.

The shape means it will offer shoulder protection on top of the chest and back coverage available with other airbags.

We’d expect it to come in under the £600 mark and there was no mention at EICMA about extra costs for the technology, but we’ll have to wait till early 2020 before full details are revealed.

Pros
ᐩ Shoulder protection will mean wider coverage than other airbags.
ᐩ Expected to be all-in-one purchase price.
ᐩ Can be worn under any jacket with enough expansion room.

Ixon’s standalone airbag vest has been around since early 2019, using tech from French firm In&motion.

The IX-Airbag U03 airbag also covers the rider’s chest and back and goes off if onboard sensors match incoming data to real-life crash scenarios.

As well as the inflatable vest there’s a traditional back protector, which stores the inflator unit, and a hard shell at the rear that stores the intelligent part of the system – the In&box.

The IX-Airbag U03 costs £379.99, though this doesn’t include the cost of using the In&box, which is effectively the system’s brain. Riders have the choice of buying that outright for 399 Euros or leasing one.

Lease costs are 12 Euros a month, with the option on a monthly lease to send the In&box back and suspend payments if riders want a few months off the bike.

The attraction of leasing is the ability to switch to updated hardware after three years, rather than being left with outdated kit.

The final cost applies to riders who want protection for road and track, as there’s a different algorithm for track riding and it’s 25 Euros a year to have access to both road and track algorithms.

If the airbag deploys in a crash it will stay inflated at 80% of the maximum until the inflator unit is unscrewed from its position inside the jacket.

If the vest isn’t damaged after a crash the owner can screw in a new inflator themselves at a cost of £89.99 and the airbag is good to go again.

In&motion suggest airbag vests can go off three times before they should be sent back to Ixon in France for inspection.

The bag itself stores 12 litres of air when deployed and it has a total deployment time of 55 milliseconds (33ms to detect a crash scenario and 22ms to fully inflate).

It takes two hours to charge the onboard battery fully and it has enough capacity to last 20 hours of riding.

The jacket weighs 1.3kg in total and is available in sizes S-XXL.

Pros
ᐩ It’s a standalone jacket that can be worn under anything that leaves enough room for it to fit.
ᐩ Initial purchase price is lower than Dainese.
ᐩ Easier and cheaper to reactivate it after an accident.

Cons
− You need to purchase or lease the In&box ‘brain’ unit on top of the initial purchase.

Furygan’s Fury Airbag vest uses the same In&motion technology as the Ixon IX-Airbag U03. It costs £379.99 and involves identical extra costs for the ‘brain’ on either outright purchase (399 Euros) or lease (12 Euros monthly/120 Euros annually) from In&motion.

Post-crash it’s the same process as other In&motion bags – screw in a new inflator to get going again, with inspection needed at a service centre after a third inflation.

The Fury Airbag differs in that it zips into Furygan outer suits and jackets, either leather or textile. A range of airbag-compatible jackets have been introduced to Furygan’s range, though they also say the Fury Airbag will connect into any recent Furygan suit or jacket with a zip-in thermal lining.

You can read more about the Fury Airbag in our full report here.

Held are another firm who’ve partnered up with In&motion. The internal tech is the same as Ixon and Furygan, though Held’s eVest Clip-In attaches inside Held jackets and suits using their Clip-In Technology poppered loops.

Yup, another company adopting In&motion’s airbag. But RST have integrated bags into one race suit and three jackets rather than offering a separate vest.

There’s a leather jacket, sporty textile jacket or adventure textile jacket – as well as that race suit – and all command a £200 premium over the cost of the same jacket without an airbag.

As with other In&motion kits, the In&box ‘brain’ costs extra… 399 Euros to buy or 120 Euros annually/12 Euros monthly to lease.

After deployment, it’s £79.99 for a new inflator the rider can screw in themselves to get the jacket or suit going again.

RST have set up a UK service centre for their airbags, where suits and jackets should be sent for inspection after they’ve deployed three times.

For more detail on the RST airbag range, read our full report here.

Pros
ᐩ If you’re buying a new outer jacket it’s the cheapest route to an airbag.
ᐩ Easier and cheaper to sort after a deployment.
ᐩ UK service centre for inspections.
ᐩ Integrating the airbag means no vest, so less material and more airflow for the rider.
ᐩ Jackets and suits are designed with the bag, so no concerns over compatibility.

Cons
− No option to use the airbag under different jackets.
− You’ve got to buy a new jacket or suit to get access.
− Trash the outer jacket and the airbag goes with it.
− The In&box ‘brain’ costs extra.

The last of the firms to partner with In&motion for 2020 are off-road folks Klim. Their Ai-1 Airbag Vest was released at Milan’s EICMA show, but there’s little specific information available so far.

Everything in the press info released on the Ai-1 suggests it will work in exactly the same way as other In&motion jackets, though the photos show it with a zip, suggesting it will be a standalone option like Ixon’s rather than one that attaches inside Klim outer jackets. We’d assume the same pros and cons as for other In&motion options, but will update this when Klim release further details.