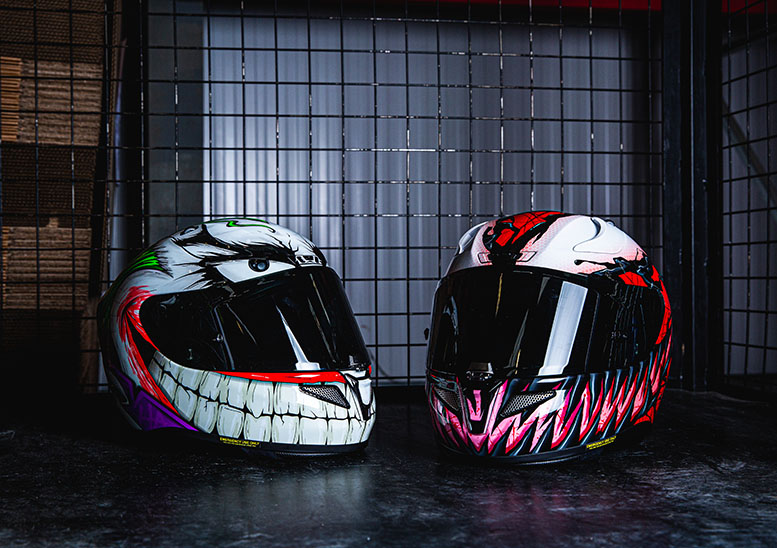 Carnage was formed when the Venom parasite gave birth and attached itself to a serial killer. The murderer took on Carnage’s lethal look, which has been translated onto the race lid.

Carnage’s bright eyes and sharp, savage teeth adorn the helmet, while a small Carnage logo on the back completes the look. The gloss is complemented by a metallic flake finish to the deep black and bright reds of the lid.

The R-PHA 11 lid underneath the design has an aerodynamic carbon-fibre and fibreglass shell, with multiple points of ventilation, emergency cheekpads and a double-D ring fastening. The visor is Pinlock ready and the insert, along with an additional tinted visor, is included in the box.

The ‘Clown Prince of Crime’ makes his long-awaited debut on HJC’s R-PHA 11, joining the likes of his arch rival Batman and The Flash.

This Joker is more Jared Leto in Suicide Squad than Cesar Romero from the 60s. His shocking green hair and stained yellow teeth are set off by the iconic purple of his suit. On the back there’s a small Joker calling card usually left at the scene of the crime, and the helmet is finished with metal flake greens and blacks.

The R-PHA 11 is HJC’s range-topping race helmet, which comes with both a clear Pinlock-protected visor and a dark smoke visor included in the box.

Helmet people LS2 are breaking into bike gloves and are delivering high levels of protection.

Their new Swift gloves are among the relatively few models to meet the higher Level 2 of the CE glove safety standard, with most approved to the lower Level 1. This means a higher score for the Swifts in a series of technical tests, which you can read more about in our guide here.

They benefit from hard knuckle armour, a hard plastic cuff insert, abrasion-resistant SuperFabric inserts on the scaphoid and a finger bridge connecting the pinky and ring fingers.

Perforations on the thumbs and small intake vents on the fingers draw in cool air, while accordion stretch panels at the base of the fingers and on the back of the hand offer flexibility and comfort.

The Swift gloves launch at £69.99 in black/fluo yellow, black/white/red or plain black in sizes S-2XL.

It has an aerodynamic sporty-look profile, multiple intake vents for airflow and has an additional dark visor included in the box. For comfort over longer distances there’s an internal sunvisor, space for intercom speakers and a Pinlock visor with insert.

Other handy extras in the box are an inflatable donut to support the helmet when it’s not being worn, and elasticated loops that attach to the cheekpads and hold spectacle arms in place.

If the new Challenger Carbon takes your fancy but the price doesn’t, LS2’s new Storm helmet is a little more budget-friendly.

With RRPs ranging from £119.99 for plain colours to £129.99 for graphics, the LS2 Storm’s shell is constructed from Kinetic Polymer Alloy (KPA), an LS2-developed material which cases stretched aramid fibres sandwiched by plastic.

LS2 say this allows a lighter shell, though we weighed the Storm at 1547g and that’s consistent with what we’d expect for an entry-level plastic-shelled helmet.

The sports-styled shell houses a sunvisor, which is operated using a switch on the base. On the outside, a top vent and a chin vent allow cool air to flow, while the visor can be fitted with the included MaxVision insert for a deeper field of fog-free vision.

There are 12 colours to choose from, and the Storm comes in sizes XS-2XL.

As part of their 2020 collection, Richa are branching out into adventure boots.

The Richa Colt boots come in the dark brown colour pictured or in black, and there’s a choice of full or ankle length.

They’re reinforced at the toes, heels and ankles with a hard shin plate looking after the bulk of protection. The boots are CE-approved to Level 2, the highest rating in the standard.

Chunky clasps allow adjustment around the ankle and over the foot, while a Hipora membrane provides waterproofing.

The Rins rep pairs up striking red and blue stripes on the top with white and black accents and the rider’s ‘42ins’ logo, making a replica of his 2019 season helmet.

Petrucci’s replicates the lid he has carried over into 2020 with red stripes popping from black carbon and stamped silver decals that include his ‘Petrux’ nickname.

Both helmets are finished off with clear plastic aero spoilers, which can be removed thanks to the included blanking plates.