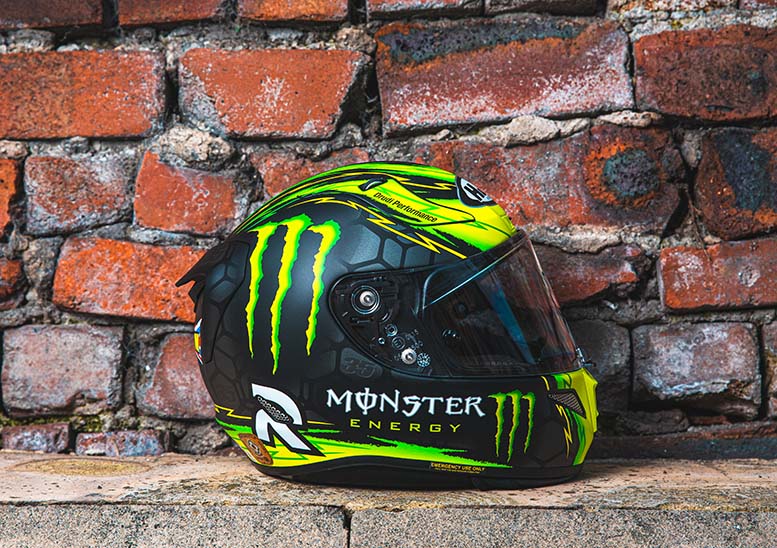 New-to-Sportsbikeshop security brand Milenco comes in heavy in this week’s round-up, while a batch of new lids leads with a MotoGP replica…

An exact replica of MotoGP rider Cal Crutchlow’s helmet is now up for grabs.

Cal Crutchlow only joined the HJC line-up at the beginning of this season, bringing with him a bright yellow and green helmet livery. Inspired by the Monster Energy colours, the vibrant yellow and green lid is an exact match of the one he’s using in the current MotoGP championship.

The striking design is on HJC’s R-PHA 11, and features Monster Energy branding on a matte black background, with the British rider’s logo and racing number ‘35’ on the back.

The R-PHA 11 has a carbon fibre/carbon/fibreglass construction, multiple points of ventilation and a Pinlock visor (with insert included in the box). A tinted visor is also supplied with the helmet.

The Cal Crutchlow replica is currently only available in sizes S and XL, and has launched at £479.99.

Schuberth’s C4 Pro has proved popular since its arrival in March, and they’ve now followed it up with the carbon version.

The C4 Pro Carbon is available three colours – black/white, red/white and fluo yellow/black – and has a launch price of £699.99. Its carbon construction means it’s roughly 185g lighter than the C4 Pro, weighing in on the SBS Mag scales at 1502g compared to the 1687g of the C4 Pro.

Feature-wise, the C4 Pro Carbon is the same as its non-carbon sibling, with a flip up chinbar and drop-down sunvisor. Inside, speaker recesses team up with an inbuilt microphone to accommodate Schuberth’s own SC1 comms system.

The C4 Pro Carbon is available now in sizes XS-2XL.

The original Darksome, which boasts a tri-composite-fibre shell, was released earlier this year and combines a square-jawed streetfighter look with the practicality of a flipfront.

Now it’s joined by the Darksome Carbon, with a carbon-fibre main shell that brings weight down from 1577g to 1426g while also looking very appealing.

While the main headform is carbon, the hinged chinbar is made from plastic, as is the case on the majority of flipfront helmets.

Practicality is further boosted by a dropdown sun visor, a Pinlock MaxVision main visor and twin vents above the forehead to keep things cool. The lining comes out for washing and the chinstrap fastens with D-rings, which is unusual for a flipfront helmet.

If the idea of a bike lock is to slow thieves down then here’s something that should frustrate them to the point of hacking at their own wrists rather than the chain links.

Milenco’s Snaefell lock threads through a chain that more closely resembles a boa constrictor than a regular bike lock, with links made from massive 22mm diameter cro-moly steel.

The chain weighs a crazy 10kg per metre, plus 2kg for the padlock itself. So the shortest option with a one-metre chain weighs in at 12kg and the two-metre version is an arm-fatiguing 22kg.

Clearly this means it’s security for use at home rather than on the move. But if the plan is to throw the toughest obstacles in the thieves’ path then you’ve just found them.

At £249.99 for the one-metre chain and £349.99 for the two-metre, it’s for those who are the most serious about security. But the locks are in the exclusive club to attain Sold Secure Diamond status, which means it’ll even resist a 90-second attack with an angle grinder.

The Tourer 6 gloves have a textile and leather mixed construction and make use of Alpinestars’ own Drystar waterproof membrane.

The gloves are approved to the lower Level 1 of the CE standard, which includes their flexible knuckle protection. The sides of the hands have also been reinforced for improved abrasion resistance. Fabric stretch panels at the base of the thumbs give extra flexibility and comfort, while touchscreen-friendly fingertips mean you can effortlessly use these gloves with a smartphone or sat-nav.