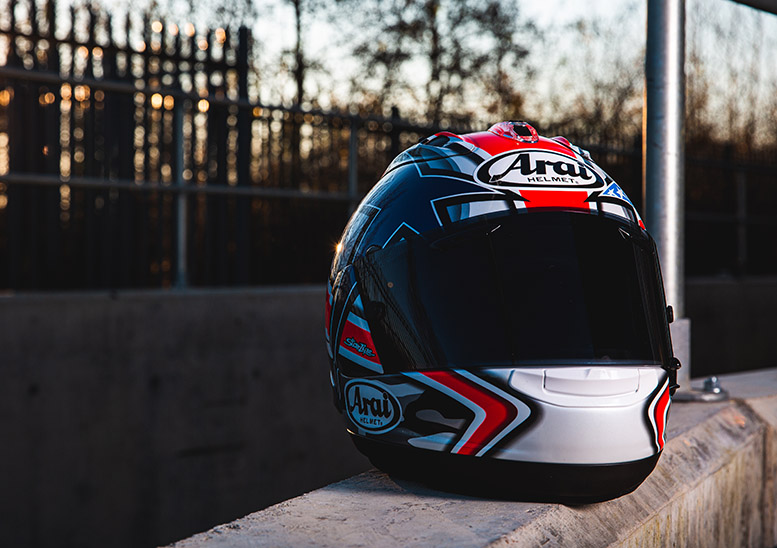 This week’s new gear round-up leads with a fitting tribute to a world champion, followed by some cool tech and gloves to keep you warm as we ride into winter.

Replicating the design he wore at his home round in 2006, the Hayden Laguna Seca graphic comes to the Arai RX-7V. It features a star on the left-hand side, which is filled with the stars and stripes of the American flag. Black and grey camouflage covers the back, while thick red stripes complete the design.

Arai’s top-of-the-line RX-7V features their VAS visor for better vision, a visor lock system derived from their F1 helmets and a removable and adjustable lining.

The Nicky Hayden Laguna Seca replica has launched at £789.99 in sizes XS-2XL.

Like to film your rides but want to stay connected to the world?

The new Sena 10C Evo allows you to do both at the same time. The in-built camera can capture your best biking moments in 4K and the intercom has a range of one mile, and can connect with three other intercoms. With a 20-hour talk time you’ll be able to chat with your mates for even the longest day in the saddle.

Switch on the camera using an easily accessible button on the top of the unit and you can film high-definition rides while narrating through the included microphone, saving editing time.

In-built Wi-Fi on the unit means you can access your footage straight away using the Sena camera app, and instantly share it with the world.

Knox’s new Storm gloves have arrived to help riders battling on through winter.

They’re made from goatskin and textile, and feature a Hipora waterproof membrane as well as a 100-gram Thinsulate warmth liner.

The Storm gloves are CE-approved to he basic Level 1, which includes soft knuckle armour. Knox’s Scaphoid Protection System (SPS) will help the wrist slide easily over tarmac rather than trapping it underneath the body in the event of an accident, helping prevent common and tricky-to-heal scaphoid injuries.

Dainese’s Coimbra Windstopper gloves are now available in contrasting navy blue and black, adding to the black version that has been available since September.

The Coimbra gloves make use of Gore Windstopper, a protective windproof membrane that stops wind chill getting through to your fingers, while remaining breathable enough for sweat to escape. A knitted cuff also helps form a defence against the elements by creating a tighter seal around the wrist.

The textile outer construction is reinforced with leather on the palm for increased abrasion resistance, while the gloves are CE-approved to Level 1, which includes their hard knuckle armour.