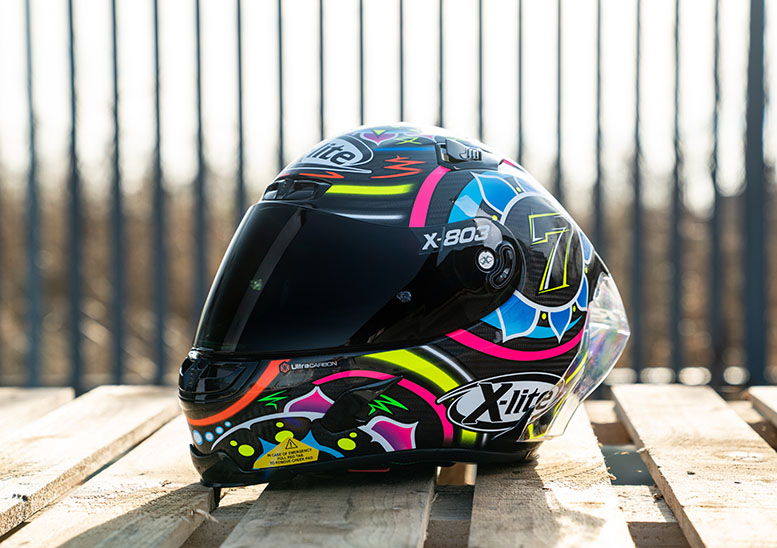 This time of year sees a hammering of new helmet models released, so this week’s new gear highlights is dedicated to the newest lids of 2020…

X-Lite’s X-803 Ultra Carbon lid has been around for a little over two years, and for 2020 it receives a race-ready upgrade.

The new RS (Racetrack Setup) model keeps the base features of the regular version, but adds a clear plastic aerodynamic spoiler and there’s an additional dark green race visor in the box.

It also uses X-Lite’s Liner Positioning Control (LPC), which allows the rider to adjust the height of the lining to suit their head shape using a strap stored in the neckroll.

The carbon-fibre shell comes in three sizes (2XS-S | M-L | XL-2XL). The visor has a wider field of peripheral vision than the outgoing X-802RR and comes with a Pinlock in the box. A visor locking tab also stops unwanted opening when riding at higher speeds.

The X-803 Ultra Carbon RS is currently available in plain carbon at £479.99, or in the colourful Chaz Davies replica pictured at £579.99. Carbon graphics and two more replicas – Alex Rins and Danilo Petrucci – will be available soon.

Aimed at urban riders and commuters, Shark’s new Evo ES is designed for those who want the best of both worlds.

The modular lid can be worn either as a full-face, or with the chin bar up and locked at the back of the head. Shark’s patented ‘Auto-Up’ system means the visor automatically moves when the chinbar is raised or lowered. An internal sunvisor can be operated using the sliding switch on the top of the helmet.

A chin vent and two vents on the top of the helmet keep the head cool, and the lid is compatible with Shark’s Sharktooth Bluetooth headset.

AGV claim their new K6 can take on any kind of riding, from tackling the track to a long-distance tour.

They say the K6 is 48% more protective than required by helmet safety legislation, thanks to the use of five EPS densities to better absorb impact energy. The visor mechanisms have also been made smaller to cut the amount of helmet that doesn’t have EPS.

The Ultravision visor has a MaxVision Pinlock insert included with it, and the visor has five opening positions – fully closed, fully open and intermediate steps at 70°, 50° and 35°.

You can read our more in-depth report about the AGV K6 here.

Shark have overhauled the D-Skwal for 2020.

The new D-Skwal 2 receives a ventilation makeover, with reshaped intakes and exhaust vents on the chin, forehead and back of the lid. They’ve also changed the shape of the rear spoiler, making it more prominent and improving aerodynamics.

For the most part, the D-Skwal 2 keeps the features of its predecessor. There’s an internal drop down sunvisor, and the main visor accepts the Pinlock MaxVision insert that’s included in the box.

The D-Skwal 2 has launched in a range of plain colours and graphics, with RRPs starting at £149.99 and raising to £189.99 for a Johann Zarco replica.

The LED lights on the forehead, chin and back are brighter, and some paintschemes (such as the helmet pictured) receive green LEDs rather than clear.

The interior is also upgraded, with a new breathable and sanitised lining which can be removed and washed.

Other features remain the same as the outgoing model, including an internal sunvisor, Pinlock visor with MaxVision insert included and a location for the Sharktooth intercom.

Nolan’s leading flip-up helmet receives an upgrade for the year, transforming into the N100-5 Plus.

The ‘Plus’ comes from the overhaul of the inner lining. The addition of the brand’s Liner Positioning Control (LPC), means the rider can adjust the lining to suit their head. A perforated fabric has also been used inside to increase airflow around the head.

The N100-5 Plus is dual homologated, meaning the lid can legally be worn with the chinbar up or down. The main visor comes with a Pinlock already fitted, while the inner drop down sunvisor has been fog treated.