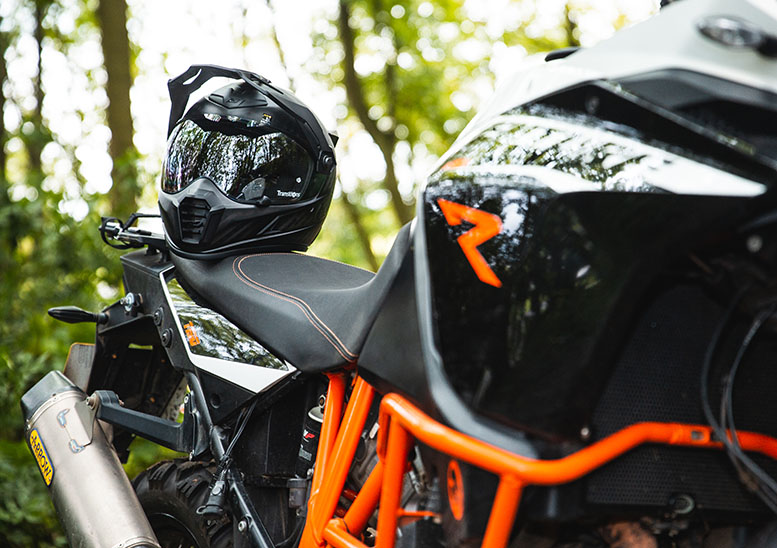 This week’s new gear picks feature a mix of touring and adventure, with a sprinkling of urban thrown in for good measure.

Klim are the first motorcycle brand to use the new material, which consists of miniature tubes welded together and is designed to protect the rider by buckling under impact to absorb and disperse the energy generated.

The manufacturers of Koroyd claim it is effective in a wider range of temperatures than the expanded polystyrene (EPS) liner used in the vast majority of helmets.

The arrangement of the bright green tubes means a honeycomb-like structure, which means the material naturally flows more air than an EPS liner.

Koroyd is used in conjunction with EPS, with a section of the new material covering the helmet’s crown area. It’s backed by an EPS structure that maintains the helmet’s structural integrity.

Innovations aren’t limited to the new Koroyd material. The Krios Pro has a nifty Fidlock quick-release chin strap, which uses magnets to secure it rather than having to faff around with a D-ring. It also means you can fasten your helmet without having to take off your gloves – bonus!

A Transitions visor means you don’t have to worry about glare, because it quickly darkens to protect your eyes when the sun shines. The Krios also has the basics covered, with a Pinlock visor insert and a removable liner.

The Krios Pro has launched in two colours – grey/black or matt black, in sizes S-3XL at £525. A third black/brown colourscheme is expected soon.

New Arais seem to be like buses – you wait for one, and four come along in quick succession. This is the last new Arai model to be released this year – an urban-styled offering that comes in six different colours.

The Urban V is classically styled, with a faux-leather trim around the edge of the lid, topped with cream coloured stitching and popper buttons for an optional peak, which it shares with Arai’s Freeway lid. Arai say its rounder shape helps with ‘glancing off’, with the aim of better dispersing impact energy.

Two exhaust channels on the base of the helmet help air flow out, and the lining is fully removable and washable.

The Urban V has launched at £349.99 in sizes XS-XL, and six graphic options will be available soon.

Budget kings ARMR Moto have released a sequel to their Kumaji textile jacket.

The original Kumaji went down a treat because of its affordable price and features that earnt it RiDE Recommended status.

The new Kumaji 2 is largely the same, but with zipped chest vents that can be pinned open using magnets. A removable thermal liner and a fixed waterproof membrane keep you protected through colder rides.

Protection-wise, the Kumaji 2 has CE-approved armour for shoulders and elbows, as well as an included back protector. Scotchlite panelling on the chest, pockets, sleeves and back keep you visible under car headlights.

ARMR Moto’s new jacket debuts at £199.99 in a huge ranges of sizes − XS-10XL, and comes in black/fluo yellow. It’s also available in a ladies cut for the same price in the same colour, in sizes 8-24.

Two new intercom units from Interphone offer differing levels of connectivity depending on which one you choose.

The major difference between the two is their range − the cheaper Connect offers 100 metres of range, which is plenty for rider to pillion chats, but an extra £50 on the Active unit gives you 1km of range for bike-to-bike comms − and the ability to connect four riders. The pricier Active unit also offers a longer talk time of 20 hours, compared to the Connect’s 15.

Range aside, the two units share the same functions. Both offer ‘Anycom’, which lets you connect to Bluetooth intercoms from different brands. They’re also backwards compatible, so you can connect to older Interphone models.

You can link both units to a Bluetooth-compatible GPS system to receive directions in your ear, and can also listen to music through your phone. There’s also a built-in FM radio with eight station presets.

In the boxes of both, you get the intercom unit, an installation bracket (which can either be clipped or stuck to the lid), a boom microphone for open-face/modular helmets and an adhesive pad microphone for full-facers.