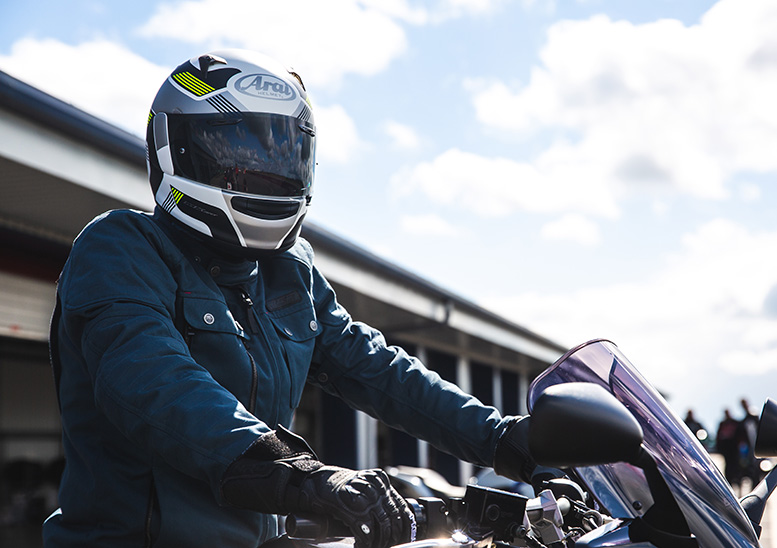 We found ourselves surrounded by sporty offerings for this week’s new gear highlights – so we took the photoshoot to Bedford Autodrome, home of the first Sportsbikeshop Road Bike Only trackday of the year…

It’s not quite like a blood moon, which only happens once every 19 years, but new Arai model releases are pretty sparse. But you know that when one comes along it’ll be a little bit special.

The biggest selling point of the all-new Profile-V is its easy access. Arai say they’ve designed the new lid to flare out by 5mm at the base, making it easier to take on and off. They say that “for newcomers to Arai, the initial ‘snugness’ can be challenging”.

The relatively lightweight Profile-V weighs in at 1501g in a size M on the SBS Mag scales, and features a Pinlock Max Vision visor with Arai’s Formula 1 developed visor latch.

Being one step up from the entry-level Debut, the Profile-V makes use of their VAS visor system, which is where the ‘V’ in Profile-V comes from. The VAS visor system lowers the visor’s mounting position to create a smoother shell shape to better deal with “glancing off” (the helmet’s ability to disperse impact energy).

And while Arai may never produce a full-on sports-touring helmet complete with drop-down sunvisor, they are still catering to that market by allowing the attachment of their Pro Shade, which is mounted on top of the visor to combat sun glare.

The new helmet also includes Arai’s signature brow vents, along with three intake vents and a large chin vent. Inside, the interior is mostly removable, with the ability to take off the cheekpads to wash but not the top padding. A speaker pocket has also been added for easy intercom installation.

For sporty performance and all-weather capabilities, look no further than Dainese’s newest jacket.

The new Laguna Seca textile jacket has landed in four colours – red/black/white (pictured), white/fluo red/black, black/red/white or plain black, and has launched at £239.95 in sizes 2XS-2XL.

The outer is made from abrasion-resistant Cordura, backed by Dainese’s own D-Dry waterproof membrane and a removable thermal liner. Level 1 CE-approved shoulder and elbow armour comes as standard, and the jacket as a whole is rated to the basic ‘A’ level of the new CE tests.

There’s one zipped vent on each arm and two on the back of the jacket to keep air flowing on hotter rides. A long connection zip allows the attachment of Dainese jeans.

You could be forgiven for thinking Shark had taken the opening credits from ’90s TV show The Fresh Prince of Bel-Air and thrown them onto their sports-touring Spartan Carbon helmet.

But Fresh Prince it is not. Shark’s latest release is a replica of the helmet five-time MotoGP champion Jorge Lorenzo wore to victory at the 2018 Catalan GP, with neon graphics said to be inspired by British band Coldplay.

If you want a glove ideal for tackling hot weather riding, it doesn’t mean you have to compromise on safety.

Dainese’s new X-Moto gloves are all about the sporty look but their Ergo-Tek steel knuckle armour (certified to Level 1 of the CE standard) brings beefy protection. A goatskin leather palm is combined with an extra layer of leather along the outer side of the hand for extra abrasion resistance.

Mesh fabric inserts on the back of the hand and tops of the fingers keeps air flowing, and a neoprene cuff makes for a tighter fit around the wrist.

The X-Moto gloves have launched in black/white/red (pictured), black/grey, black/fluo red or black/fluo yellow. They’re available in sizes S-3XL at £79.95.