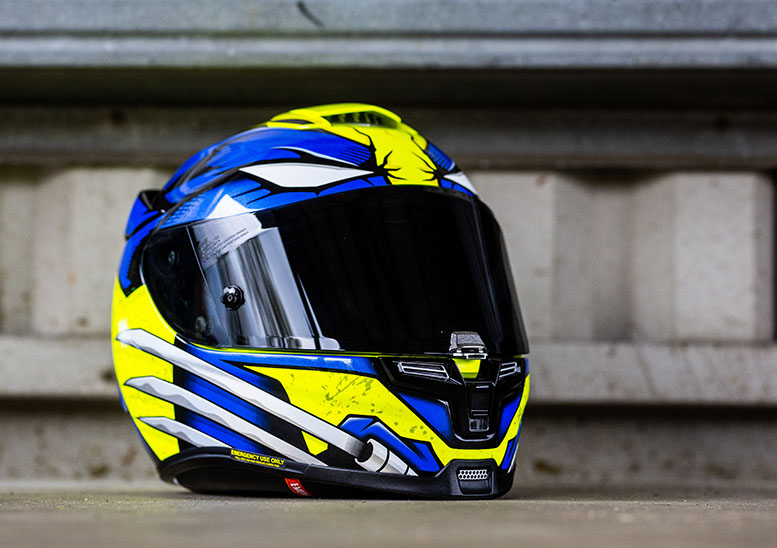 Sometimes we get new releases we can really get our claws into. That’s the case in this week’s New Gear Highlights, thanks to Wolverine and HJC…

HJC have pretty much drained the Marvel universe of potential lid designs, but it seems there’s always room for more.

Wolverine, who reached peak prominence when Hugh Jackman took the role in the X-Men movie series, joins the HJC line-up for 2019.

The lid features his yellow and blue colours from the 2018 comic miniseries ‘Return of Wolverine’, with his signature adamantium claws on each side and the Marvel logo on the back.

The new design is on HJC’s sports-touring R-PHA 70, which features a drop-down sunvisor, Pinlock-protected visor (with insert included) and a carbon-fibre and aramid mixed construction.

The Wolverine paintscheme has launched in sizes S-XL at £549.99.

A new collection within Alpinestars’ female-focused Stella range will give women even more choice when it comes to sporty bike kit.

The Kira range kicks off with this new leather jacket and it’s available in black/white, although more colours are expected soon.

It’s loaded with stretch panels to give a more flattering and comfortable fit, including accordion panels on the back of the shoulders and elbows for flexibility.

Airflow comes in the form of perforation in the leather on the lower chest and zipped vents on the top of the chest. A thermal liner can be removed if needed.

It comes with CE-approved shoulder and elbow armour, and there’s also a pocket for an optional back protector. The whole jacket is also CE certified to ‘Tech’ – the equivalent of the highest ‘AAA’ rating of the new standard.

If ever a name betrayed a product’s purpose, it’s the Metropolis D-WP.

It’s clear they’re aimed at urban and city riders with a blend of casual trainer and protective riding boot.

They’re CE-approved to the lower standard for short boots, with a stiff and supportive sole as well as malleolous protectors on each side of the ankle.

The Metropolis are more trainer-like than some other boots of this style, but they have an extra layer on the suede outer to protect against damage from the gear lever and a zip closure on each boot to save the palaver of tying laces every time.

A non-waterproof version of the Metropolis is expected soon, which will also be available in a ladies version.

They say good things come to those who wait – and Caberg will be hoping those people are correct.

The new Levo helmet will look familiar to those who paid close attention during 2016’s bike show season. It’s a dead ringer for a Caberg’s Levante, which they unveiled that autumn as part of the 2017 range.

For some reason the Levante never reached the showroom floor, but the renamed Levo certainly has.

It’s a flipfront touring lid and the main headline is the amount of vision available. Caberg call it a panoramic visor, with a wide and deep field of view. A scoop out of the chinbar gives extra depth and there’s plenty of width available too.

The visor is supplied with a lid-specific Pinlock MaxVision that’s deeper than usual to minimise hindrance to vision, and there’s also a retractable sun visor.

The new lid is part of Caberg’s attempt to go upmarket, with a composite-fibre shell for the main helmet section ­ – the chinbar is plastic, which is common even on the poshest flipfront lids.

It comes in two shell sizes (one for XS-M and another for L-XXL) and the medium weighs in on the SBS Mag scales at 1590g – very respectable for a flipfront.

The velour-feel inner lining is removable and has scoops around the ears that, combined with removable inserts tucked into the EPS, leave masses of room for intercom speakers.

There’s plenty of venting, a P/J safety rating so it can be worn with the chinbar locked in the up position. It seems to be a case of better late than never for the Levo, which launches in plain white or matt black at £319.99.

Life in the city is often one big rush, and Alpinestars’ new gloves are designed to keep you moving.

The Axis are short urban gloves that promise a heap of flexibility, ease of use and important features like touchscreen-compatible fingertips.

They’re sportily styled urban gloves with a main construction that’s almost exclusively leather, but with fabric between each finger for more flexibility and increased airflow.

There are accordion stretch panels at the wrists and the first two knuckles of each hand, where the most flexing is required.

The all-important touchscreen fingertips consist of fabric overlays on each forefinger, making smartphones and sat-navs a doddle to use.

They’re available in the black/white scheme in our pictures or a plain black version in sizes S-3XL with a launch price of £64.99.