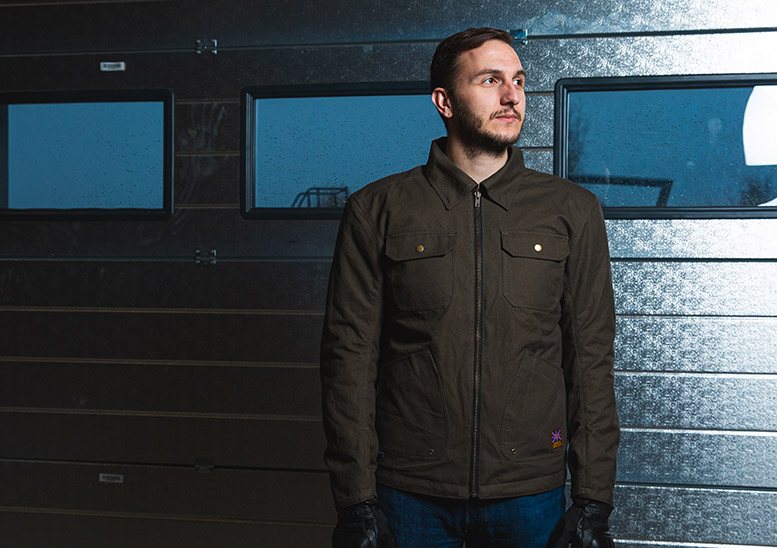 Waterproof jackets and heated gloves are the name of the game in this week’s new gear round-up, which includes a new-to-Sportsbikeshop brand…

Merlin’s autumn collection has been trickling out over the last few weeks and their new Dawson textile jacket can take you straight through the seasons.

Styled to look like a regular shirt, the Dawson jacket has a Reissa waterproof membrane as well as a fixed thermal membrane, all hidden behind the tartan lining. The main outer is constructed from Halley Stevensons canvas cotton, which has a water-repellent treatment.

D3O armour is used in the shoulders and elbows, and there’s a pocket for an optional back protector. Four outer pockets and two inner pockets provide plenty of storage space, while a short connection zip allows the attachment of Merlin jeans.

The Dawson jacket has launched in three colours – peat (pictured above), navy or tan in sizes S-3XL at £229.99.

New-to-Sportsbikeshop Italian brand Tucano Urbano offer a range of stylish and practical riding gear, including a pair of heated gloves.

Their Handwarm gloves launch at £169.99 in sizes XS-2XL, and are made from a combination of neoprene and leather. A PrimaLoft thermal lining traps the generated heat, while the brand’s own Hydroscud waterproof membrane keeps out rain.

The gloves are operated by a 7.4v lithium battery, and two are included in the box along with a charger. A simple one-touch button on the top of the cuff turns the gloves on and gets them heating, and once on, Tucano Urbano claims the batteries will last four hours before needing to be recharged.

They’re CE-approved to Level 1, which includes their soft knuckle armour. D3O inserts on each scaphoid provide extra protection to the palm, while silicone printing improves grip on the handlebars.

These gloves are the direct replacement for Keis’ G501 heated gloves, which are bowing out after one season.

The G502s retain the majority of the outgoing pair’s features, including a Hipora waterproof membrane, rubber visor wipe, hard carbon-fibre knuckle armour and stretch panels across the back of the hand and fingers for comfort.

Upgrades come in the warmth department, as the G502 gloves use a significantly warmer 100gsm Thinsulate liner to help trap in the heat. A carbon-fibre scaphoid slider has also been added.

The G502 gloves are able to be powered by either a bike battery (using the supplied cables) or standalone batteries, which are available as an optional extra. The batteries fit neatly into a designated zipped pocket on the outer cuff.

Tucano Urbano aren’t shy of joining in with the growing retro trend, as shown by the POL 2G textile jacket.

The wax cotton-look jacket is CE-approved to the basic Level ‘A’ of the new standard, and includes Level 1 shoulder and elbow protection as standard, plus there’s a pocket for an optional back protector.

Zipped vents down the side of each jacket provide airflow, and the watertight zips ensure that if you do get caught out in the rain, water won’t leak through.

Four pockets on the front (two with watertight zips) combined with two large pockets inside and a Napoleon pocket give plenty of space for carrying items.