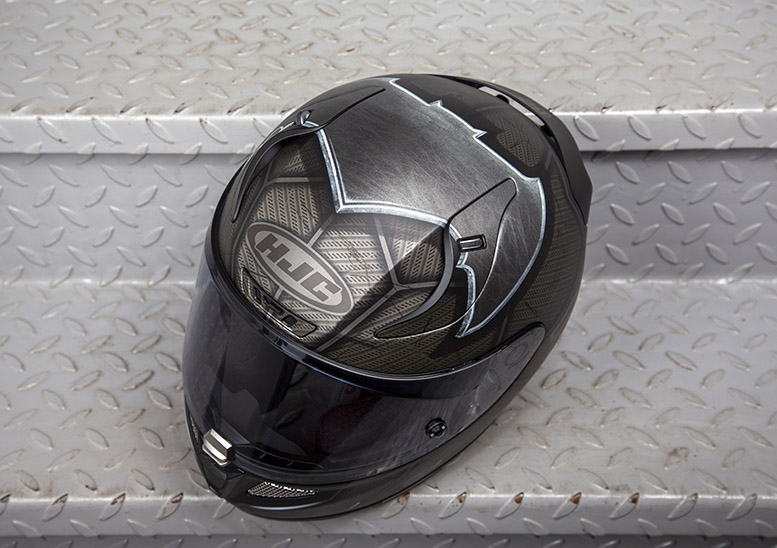 The lid is more Batfleck than Adam West – its subtle silvers and greys a far cry from the popping colours of the ’60s caped crusader. Two Batman logos adorn the lid, one on the top and one on the back, which are both outlined in silver to help them stand out against the matt grey background.

The new graphic is on HJC’s top-of-the-line sports lid, which has their RapidFire quick-change visor system, multiple vents and a Pinlock visor with insert included. The R-PHA 11 also comes with an additional tinted visor in the box.

Bull-It are no strangers to the growing trend for casual-styled bike gear.

The new Tactical hoodie joins their Tactical jeans range, and uses abrasion-resistant Covec in its construction. It boasts high-end protection, reaching the mid-level ‘AA’ rating of the new CE standard, as well as including Level 2 rated shoulder, elbow and back armour as standard.

Gerbing are filling our winter with warmth thanks to their new heated jackets.

The new premium jacket liner utilises their MicroWirePRO technology, which uses a greater quantity of thinner and stronger heating wires than the previous model.

It has heated panels on the chest, back, collar and sleeves for all-round warmth, as well as long stretch panels down each side of the jacket for a better fit. There are also four pockets on the front to store small items.

The new MicroWirePRO gloves can be plugged into power ports on the jacket, as can other accessories such as heated trouser liners or socks. The jacket itself can be powered either using a 10Ah external battery (available soon) or by plugging it into a bike’s battery.

If you’re not planning to hook extra Gerbing gloves or accessories to the heated liner, they’ve also launched the pocket-less Basic heated jacket for £10 less, which will not power anything else. That ones has launched in sizes M-2XL.

The new design, ‘The Zone’ features bold, thick gloss black stripes on a white backing, with matt red on the top of the helmet and along the neckline.

Bell’s Race Star has a carbon shell, cheekpads held in place by magnets and speaker pockets. It also makes use of Bell’s Flex three-layer liner, where each layer is designed to absorb energy at different speeds in an impact. Upon impact, the three layers will also ‘slip’ against each other to reduce the amount of rotational energy that is passed down to the rider, minimising head and neck injuries.

Just in time for the cold months, Dainese have released a ladies winter glove.

The Aurora gloves use Dainese’s own D-Dry waterproof lining and have thermal padding to help keep you warm and dry as the mercury drops. A rubber blade on the left thumb makes wiping rain off the visor easy, while touchscreen-friendly fingertips mean sat-navs and smartphones can be used without removing the gloves.

Protection comes in the form of hard knuckle armour, scaphoid padding and a leather overlay along the outer side of the hand, while the gloves are CE-approved to the basic Level 1.

The Aurora D-Dry gloves have launched in black/white (pictured) or black at £79.99. They’re available in sizes XS-L.