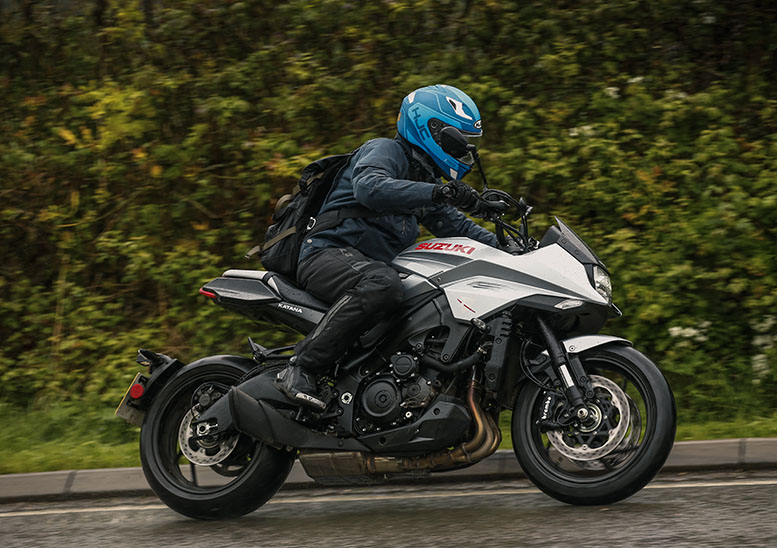 It’s clear the latest interpretation of the eyecatching yet divisive Suzuki Katana is an exercise that’s all about styling.

Mixing a 1980s vision of the future with 2019 technology is an interesting experiment and follows a path well trodden by most of Suzuki’s manufacturing rivals. Suzuki, however, are at pains to point out this bike is a modern interpretation of the design unveiled at the 1980 Cologne Bike Show, not a faithful re-enactment.

The original’s clip-on handlebars are gone and the numberplate hanger now wraps around the back wheel rather than emerging from beneath the pillion seat. But there’s no mistaking that design. It’s a Katana.

When looks are so key, road tests are inherently tricky. If you hate its appearance, stop reading now. It’ll save me wasting your effort in finding out what it’s like to ride.

If you’re in the other camp and like what you see in the pics it’s probably worth the dance of carrying on – because first impressions suggest there’s a bloody decent motorbike lurking underneath those sculpted sheets of plastic. 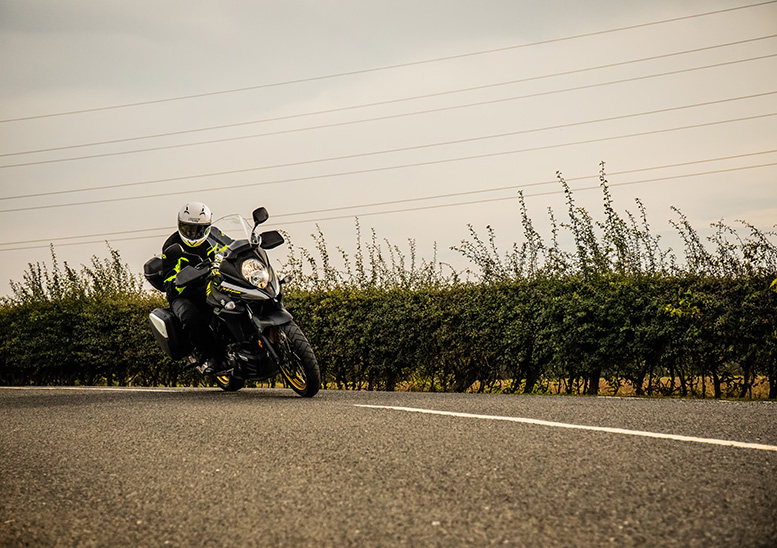 We possibly could have worked that out beforehand, as the Katana inherits most of its architecture from the GSX-S1000 super-naked. That’s the one that wraps a decent chassis and neat electronics package around a revamped version of the sumptuous motor from the GSX-R1000 K5.

That’s the engine making peak torque of 80lb-ft at 9500rpm and going on to produce 145bhp at 10,000rpm. Regardless of whether it’s in either of the GSX-S iterations (naked or half-faired) or the new Katana, it remains a gem.

It’s strong and pulls hard without malicious peaks or ledges, charging lustily towards illegality in a perfectly controlled manner.

In fact, it’s better than existing versions of the GSX-S, thanks to a simple Suzuki alteration that eliminates the main criticism of their super-naked. A resculpted throttle tube, now running the cable around an asymmetrical shape, softens the initial throttle response and cures the snatchiness for which the GSX-S attracted so much hostility.

That criticism was well deserved – the GSX-S felt like a bike with cush-drive rubbers that had worn out or just been left out at the assembly stage. No such trouble in the latest form. Who’d have thought reshaping a bit of plastic could fix that?

Conditions on the UK riding launch made the revisions particularly welcome. At best they could be described as soggy, at worst rain-soaked. I’d never class slippery Cotswolds roads dusted in windswept grass trimmings as fun, but the Katana behaved beautifully in an environment that would have made the old bike’s lurchy nature a challenge.

Traction control in its most-protective state (level three of three) reassures without needlessly getting into the action and the brakes are strong with the feel needed to stay this side of the point where the ABS kicks in.

Wet, traffic-cluttered roads don’t give real chance to give a bike some hammer and find out what it’ll really do (does that sound like an excuse to try again in summer?), but the initial findings are very promising.

For those who liked the Katana’s looks enough to read this far, there are probably some practicalities we need to cover.

The sleek looks come at a price that you may or may not consider appropriate. Firstly, the tank was designed to look good, not to carry a hefty amount of fuel. The 12-litre capacity is five litres less than a GSX-S and gives a realistic range of 115 miles to empty (probably around 85 to the first warning).

The natty (yet also divisive) side-mounted plate hanger that wraps around the back wheel also means the Katana is a filthy little monkey. Most of the road muck our test party encountered ended up splattered over the bike or the riders.

But whether any UK rider is looking to the Katana as a practical offering is a moot point. Those who love riding in the rain and hate petrol stations are probably best off exploring the GSX-S instead.

For those who are drawn to its quirky looks and want to know if the bike underneath is good enough to make it worthwhile then the answer is yes – it’s a thoroughly decent motorcycle that’s well worth a look.

Retros like this sometimes come with a ‘what did you expect?’ mentality, as if expectations of comfort and manners have to be jettisoned before swinging a leg over it. The Katana doesn’t demand that trade-off, giving the looks and the attitude to back it up.

So it all depends on whether you like it. And that’s definitely down to you!