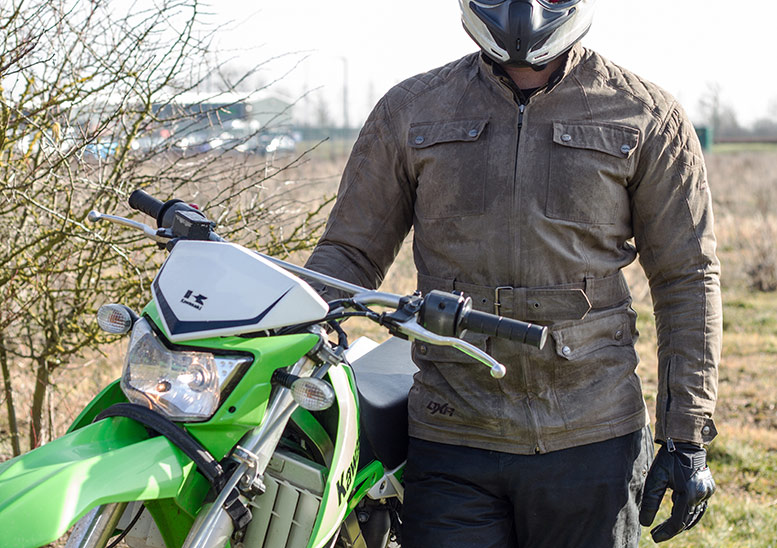 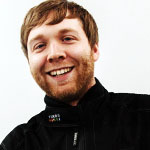 This was my first step into casual-looking jackets and my biggest concern with the DXR D908 was sacrificing safety for comfort, as in my mind a waxed cotton jacket like this wouldn’t offer the same abrasion resistance as the more modern textiles I was used to.

I discovered within the first two weeks of having this jacket on test that my concern was misplaced. In a 30mph spill on a roundabout near Sportsbikeshop HQ the jacket held up perfectly.

The only damage it displayed was a mark on the material at the elbow where it made contact to the floor, but the abrasion didn’t tear or rip the jacket. Even that has now disappeared, fading and blending in with the jacket’s distressed finish.

The D908’s aged look takes its cues from legendary waxed cotton jackets made since the 1940s by the likes of Belstaff and Barbour. This ageing process continued as I wore it, so if you like your kit to look fresh and crisp all of the time then this jacket isn’t for you. This wasn’t a problem for me and I felt the jacket looked better and better as time wore on.

Although I’ve not racked up huge miles in it, the D908 has been on and off daily during my commute, has hit the deck in my tumble and I’ve even worn it while trail riding. It took everything I threw at it, so I’m confident it would last a long time.

The spec level of the D908 is good, with soft and flexible armour at the shoulders and elbows. It’s thick and adds weight to the jacket, but the supple feel meant it remained comfortable throughout.

There’s a thermal liner, which I welcomed, though I would prefer it to be more substantial as I found the jacket didn’t protect me well enough from the cold. For riding on chillier days I would expect to wear a warmer layer underneath.

Allowing room for this extra layer may mean going up a size as I went for my regular size, a medium, and could only fit a t-shirt underneath before it became too snug.

Removing the thermal lining reveals a tartan-like interior that reminds me of the inside of a Mark 1 Volkswagen Golf. It’s not to everyone’s taste, but I think it’s great and it fits with this modern-made retro jacket.

The retro styling extends to the belted waist, which I feared may scratch my tank while I was riding. Thankfully the buckle’s location and the angle of the tank on my Kawasaki KLX250 meant it was never a problem for me.

On other bikes, especially sportsbikes, the belt could be an issue and thankfully it’s possible to remove the belt if the buckle is hovering close to your petrol tank.

The whole point of retro kit is that it combines old-school styling with modern-day practicality and performance, otherwise we’d just buy the original old kit from eBay. The D908 has a waterproof and breathable membrane to keep out the rain.

I found this worked OK… to a point. It would stop a light shower or drizzle, but it would saturate in a heavy downpour and water would eventually get through to the inside.

This, combined with the thin thermal lining’s lack of effectiveness in the cold, means the D908 isn’t the right option for someone who is looking for year-round riding kit.

I would describe the D908 as a jacket that looks great for rideouts in warm weather where you want proper protection but don’t want to resemble a Power Ranger.

16/ 20
The sizing is a touch on the snug side. I opted for the medium, my usual size, but I wasn’t able to get anything thicker than a t-shirt underneath. It’s straight-cut so if your stomach is bigger than your chest you’ll need to wear a bigger size to accommodate it. The hefty outer material and armour mean the jacket isn’t light, but this doesn’t make it uncomfortable.

12/ 20
It mostly remained dry, but in heavy rain it would saturate and become even heavier, which also made it feel colder. The membrane kept out most rain, but big downpours would beat its defences.

16/ 20
The breathability was good, but on warmer days I found myself overheating and I believe I would find it a little too warm on the hottest summer days, with a lack of venting to allow in cooling air.

16/ 20
The build quality overall is good. The jacket took everything I threw at it and it still looks good. My only minor criticism was that the stitching could have been neater in places.

12/ 20
This is a jacket harps back to simpler times and is not meant to be rich with features. Ventilation would be nice, but would hamper the traditional design – as would fit adjusters on the sleeves. There’s no back protector fitted as standard, but one was included with sale on Sportsbikeshop at the time of my review.