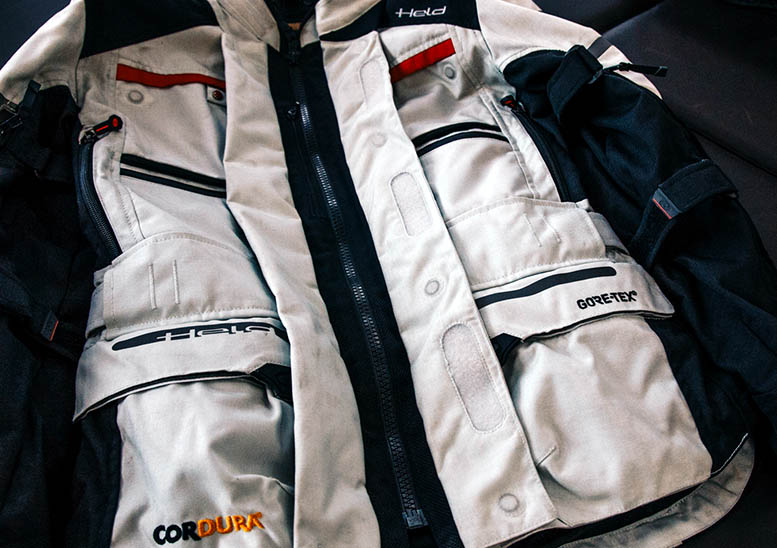 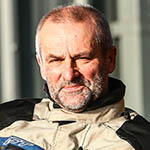 Can wearing underwear on the outside turn you into a superhero after all? 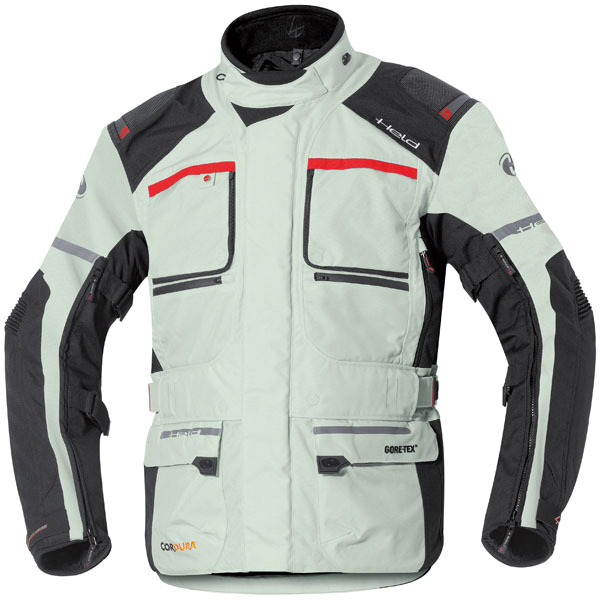 A five-week riding tour that took me as far east as Romania and Bulgaria and down into the searing heat of Greece in July meant encountering a wide range of different temperatures and conditions – and the Held Carese 2 proved itself a good choice for those tough demands.

The breathable Gore-Tex waterproof liner is secured into the jacket with zips at the front and cuffs. This feature is relatively normal, but the Held Carese 2 jacket has an innovative yet simple advantage over most other waterproof-lined textiles – the membrane can be removed from the inside and worn over the top of the suit.

This inside-out innovation is available on a range of Held textiles, including the Torno 2 trousers that match this Carese 2 jacket. I wore the Torno 2 in combination with the jacket for my 4800-mile trip. You can read the review of the trousers here.

All suits with removable membranes like this are handy in high temperatures as taking them out makes them cooler to wear. But the hassle factor of stopping, taking off a jacket and adding the liner is obvious. Also, in some countries it may cause offence to see men and women stood around in their underwear.

Another disadvantage of having the waterproof membrane inside the suit is that the outer shell absorbs rainwater. While the membrane should stop water reaching you, the jacket outer becomes heavy and gives a cooling effect that can soon make you feel cold.

The inside-out approach of the Carese 2 cures both problems – there’s no need to take the suit off to make it waterproof and the main shell doesn’t get wet.

A further advantage is that you also have a waterproof oversuit that can be used when you are not on the bike, for example while walking to the bar to get wet on the inside!

On my five-week tour I had two days of torrential rain – one in Poland and one in Austria. Stopping to put the Gore-Tex layer over the jacket was very easy and quick.

The jacket is available in a range of colours, including black, but I chose a lighter combination because even though it shows the dirt more than black it reflects the heat of the sun, keeping me cooler.

When I returned from my trip I washed the jacket in a product approved by Gore-Tex and while some stains and marks remained, in general it looked good, smelt considerably better and was clean and fresh to wear.

I wore the jacket for all but two days of the time I was away. It felt comfortable from the moment I put it on and remained a good companion for the entire trip.

It feels sturdy and is a well tailored fit, with adjustment on the waist and arms that allow you to make small adjustments to suit your individual requirements.

Zipped triangular vents at the front provide good airflow and on the arms there is a vent that opens from the wrist to the elbow.

The flap covering the front fastening zip can be left open, exposing a mesh panel that allows through more cooling air. The triangular vents at the front and the zip flap cover are held open by magnets built into the jacket and a handy hook and eye holds open the throat flap. Exhaust vents at the sides and rear of the jacket allow air to flow through the jacket.

The ventilation provided by any jacket is often compromised by other items you wear, in my case a Helite airbag vest worn over the top, but the venting around the front zip cover and on the arms was largely unaffected by my vest.

The elbow and shoulder armour, which are held in place by internal pockets, are comfortable and well placed to fit me. The elbow armour is smaller than I am used to and the back armour has to be purchased separately (£28.99-£38.99, depending on size and specification) to fit in the internal pocket.

The jacket I used had some faulty stitching on a fastener on the front storm flap. This was not enough to affect performance, but it surprised me that Held’s quality control process had not picked this up on a jacket of this price.

Despite this small issue, which would be covered by Held’s warranty if I owned the jacket, I was impressed with the Carese 2. The only issue was with the lack of a short-leg option for the matching Torno 2 trousers.

19/ 20
It’s a very comfortable jacket and the fit is true to the sizing I would expect.

15/ 20
It is disappointing in clothing of this price that you have to buy some of the armour separately, such as an extra payment for the back protector to sit in the pocket. I was also disappointed by the size of the elbow protectors.

20/ 20
Using the liner as an oversuit I was 100% dry in some very wet conditions over many miles of riding.

18/ 20
It’s well made and feels robust enough to last for many years. The poor stitching on one of the storm flap Velcro fasteners didn’t detract from the suit’s performance, although I would have expected Held quality control processes to have spotted this.

14/ 20
There’s no back protector as standard (it’s an optional extra), no thermal lining and no zip-on storm collar.