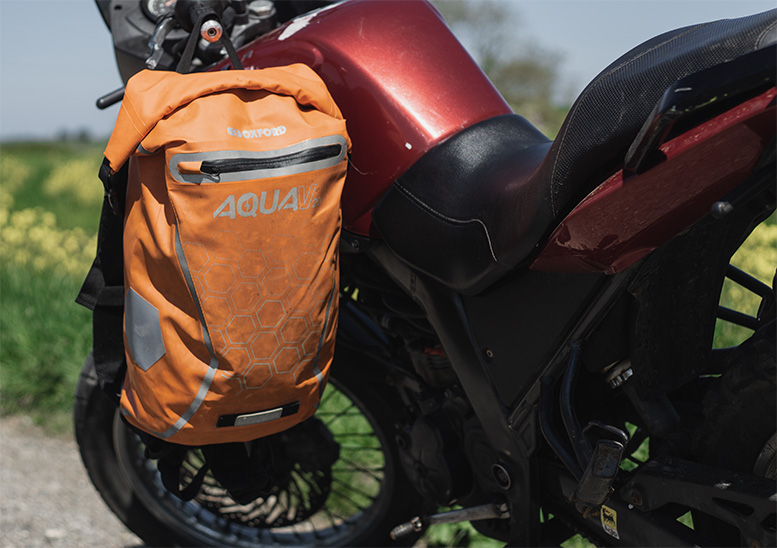 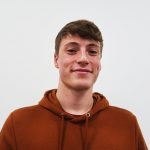 Keeping your stuff safe and dry is important on a bike. Is Oxford's V20 up to the job? 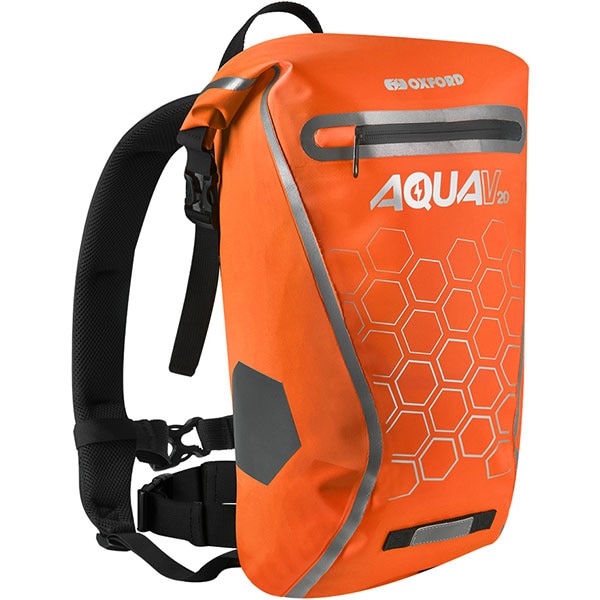 Getting soaked on the commute is one of the bad things about riding a motorcycle, but arriving to find the contents of your bag are also sodden is one of the things that tops it. That’s an issue that became a thing of the past when I got my hands on the Oxford V20 rucksack.

I had used similar backpacks in the past, albeit not motorcycle-specific ones, and those had loose straps which would flap around and annoy me as I rode. That has been no trouble in my time with the V20, with the rolltop closure often making the bag look as though there’s no opening.

It fits my essentials, and I only occasionally find myself thinking I could do with a bit more space. I can fit my laptop and peripherals, a book, pair of shoes, lunch and headphones and still have a bit of space to spare as well.

I can fit plenty of stuff in there, as long as the top edge of the bag can be rolled over a couple of times to seal it from the weather.

When packing to maximum capacity, it’s important to consider weight distribution, as the more full it gets the taller it gets. This becomes an issue as the top of the bag seems to hang off my back, even with the chest strap done up – making it uncomfortable after a while.

On the point of the chest strap, it can be moved up and down so there’s more flexibility there to get the fit right and have it sit in the most comfortable place.

Another plus for me is the bright orange colour (it’s also available in black or navy blue) and the reflective stripes serve their purpose well, lighting up bright when headlights hit them.

The reflective stripes extend down the padded section of the straps as well, which aids visibility from the front. Large reflective panels on either side ensure you’re not only seen from behind, but all around.

A zipped front pocket adds convenience for smaller items and things, in my case that was my earphones. Make sure you zip it closed though – I made that mistake once and my earphones became drenched.

The black plastic that seals the zip can make it difficult to see whether the pocket is open or shut, so I would always double check before setting off on my journey.

The biggest issue I found with this bag was condensation, especially in the colder autumn and winter months. Often, I’ll open my bag to find everything inside is a little damp. It’s not horrendous – but it’s something to bear in mind when transporting things such as laptops, which brings me onto my next point…

There’s only one compartment in the bag and nothing to stop them moving around as you ride, which is another thing to consider if you’re carrying laptops or items like loose sheets of paper as they can end up shuffling around inside the bag.

I had a small spill while wearing this bag which meant a slight slide down the road, and the bag stood up superbly, with only slight scuffs on the edges.

This bag has been a solid choice, giving me a good capacity at 20 litres (Oxford’s smaller V12 will suit who want to carry less) and the waterproofing has been a must over the winter months.

15/ 20
The times I found myself wanting more space in this bag were few and far between when it came to my day-to-day essentials. It’d comfortably carry my laptop, a pair of shoes, a jumper and my lunch. If I was expecting rain I’d leave a little more room to get the top rolled over more securely.

13/ 20
When I put it on it would take a bit of adjusting to get it fitting right, without the top half hanging off. When it was fitted right however, I could barely feel the bag.

17/ 20
I’ve not only used this bag while riding but for a wide range of uses and it’s done everything I’ve needed it to without any issues.

18/ 20
I’m very impressed with the build quality. It felt sturdy and solid throughout the time I have spent with it. Threads have started to come loose towards the end of stitching rows, but nothing that jeopardises the waterproofing.

13/ 20
It’s a simple bag that does what it should without being flash. There’s one external pocket and plenty of reflective stripes. The external pocket is waterproof, but I wouldn’t trust it with valuables like a phone or wallet as at times it looked closed but was actually open.