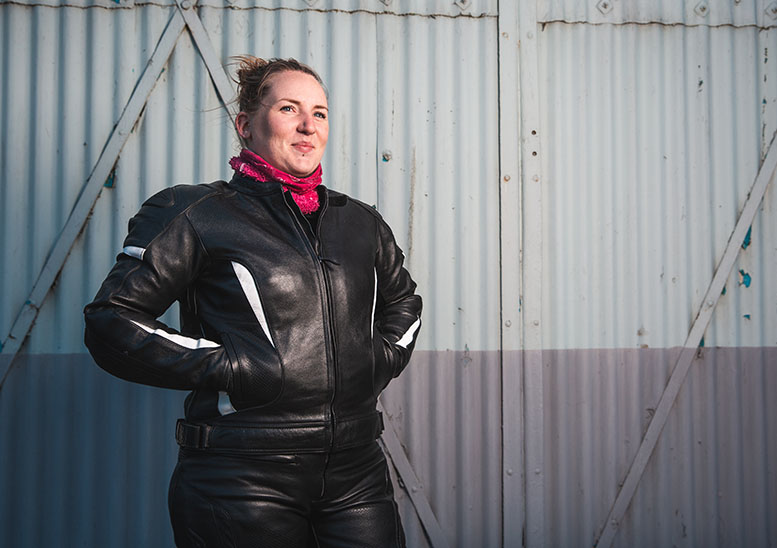 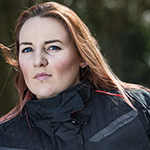 We asked someone who avoids leathers to review leathers. She thought she’d hate them. Spoiler alert: She didn’t hate them 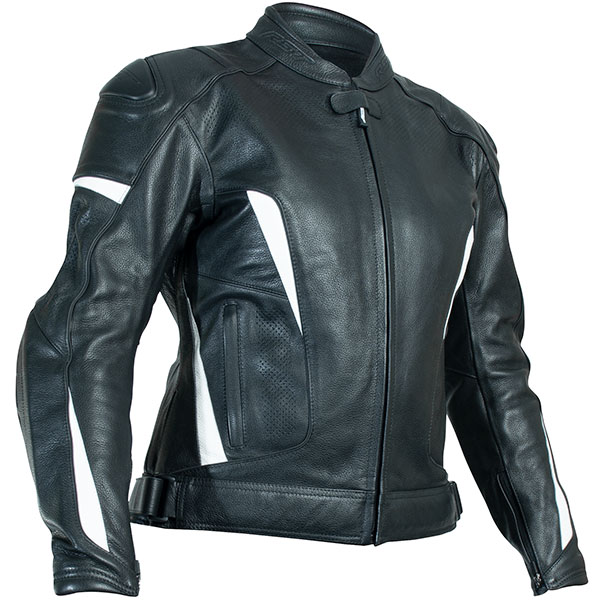 The RST Ladies GT CE leather jacket is made from ‘premium full-grain drum tanned cowhide’, which I had to research to work out what it all meant! Basically, it’s cow leather that hasn’t been altered in any way other than removing hair and then coloured using, excuse the paraphrasing, ye olde giant washing machine to make sure the dye goes into all pores and fibres.

This means you shouldn’t see any nicks or scratches when it’s new (though I’ve somehow managed to collect some subsequently) as it’s dyed black (and white) all the way through.

When I first tried the jacket on, I remember it felt surprisingly soft for the price, and heavy. I never really thought much about the quality of leather or jackets before trying this on, but I think you get a lot for your money with this jacket.

I’ve never felt too hot whilst riding in this jacket, only when I’ve stopped; that’s when you’ll see me trying to shake the jacket off like there’s a wasp inside.

I attended a road bike only trackday at the beginning of May with Sportsbikeshop where I rode with the two-piece leathers. This was the only time I can remember being a bit cold in them, mainly due to the temperature being less than 10 degrees all day, and also because I only had a thin base layer on underneath.

RST have included plastic shoulder cups which are designed to slide, like kneesliders, in the event of a crash. By placing them on your shoulder, this should reduce the likelihood of shoulder or collarbone injuries, as movement should be less restricted. That’s the plan, but I absolutely have not tested this theory with my shoulders!

I think the cups look great on this jacket as they are black and have an RST logo cut into them. I also chose the black and white jacket, so there are slices of white on the arms, chest and back, which accentuates the shape.

The ladies jacket comes with Level 2 back, shoulder and elbow armour, the best rated impact protection. I thought it was a nice touch for RST to add a Level 2 back protector, which would cost around £17, as some manufacturers aren’t including them with new jackets. The back protector is kept within a pocket, hidden by a zip, kept in place by another pocket.

For an off-the-peg jacket I thought the fit was good. Stretch leather panels on the sides, arms and shoulders ensure a reassuringly tight fit to my body, but not so tight it cut off circulation. I found the jacket to be tight around my chest, but this is quite normal for me. The sleeves are a good length and when zipped closed, they are nice and tight and fit within glove cuffs easily. The armour throughout the jacket sits in the right places.

The only negative with the fit, for me, was that the jacket was slightly baggy around my lower back but as I said, it’s off the peg, and we are all different shapes and sizes.

I liked that the jacket was slightly longer at the back and could be adjusted at the waist using zips and Velcro. Talking of zips, they’re all pretty heavy-duty on this jacket and I haven’t broken any of the tags yet, which is a usually regular occurrence for me.

The jacket connects to the trousers by a three-quarters circumference zip attached to some elasticated fabric, which I thought was a nice touch.

The liner inside is fixed, non-removable, ‘3D mesh’. This means it sits directly against your skin. I remember thinking of different ways to clean the liner, as it was sure to get sweaty, but I’ve used this jacket for around six months, for hours and hours, throughout the whole of summer, on some ridiculously hot days, and it honestly does not smell.

I can’t quite believe it, but I haven’t had to go at it with any kind of foam or deodorising potions at all. Now if that isn’t an advertisement for RST’s 3D mesh, I don’t know what is! The feels comfortable against skin and I think it makes the jacket look quite expensive.

The jacket is priced at £249.99 at the time of review and comes in sizes 8-20 and in black/black, or black/white. I chose black/white as I think the white makes the jacket look more contoured and feminine. It’s incredibly heavy but doesn’t feel overly heavy while you’re wearing it. The fact it can be zipped to matching trousers makes it convenient for weekend rides, commuting and even the occasional trackday.

I thought I’d hate this two piece suit, just because it would be bulky and heavy, would make me look awful and I wouldn’t be able to move around. I had visions of looking like He-Man in leathers, struggling to get on the bike.

Although the kit is heavy, it doesn’t feel that way when you’re wearing it, and I found myself reassured by the tight fit, thick leather, and sturdy armour. I found myself reaching for the jacket more, though I would usually opt for Bull-It Jeans instead of the full leather look as I found it more practical.

If you’re looking for a competitively priced, good fitting jacket with armour and a superb safety rating, you’re reading the right review! Ladies jackets that have matching jeans available currently range from around £130 to £400, which puts the RST GT CE right in the sweet spot.

18/ 20
Nice tight fit for an off-the-peg jacket, though slightly baggy on my lower back.

20/ 20
The jacket is very comfortable, with perforations in the leather making it the perfect summer jacket.

20/ 20
The jacket comes with Level 2 back, elbow and shoulder protection, plastic shoulder cups and it’s CE-certified to Level AAA (the top level)

20/ 20
The jacket does not show any signs of wear, despite being used and abused for around 5000 miles, over approximately six months. There are some tiny scratches on the jacket, accrued over time, but the fact the leather is drum-dyed means they are very hard to spot!