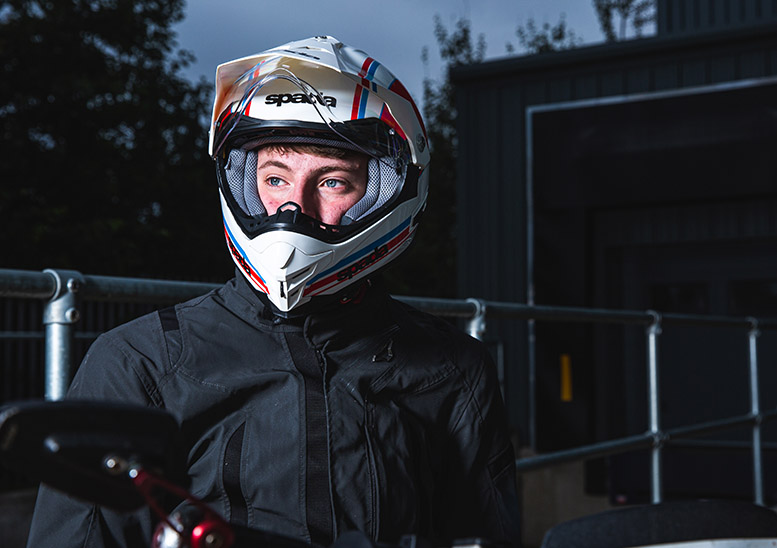 After a no-frills motocross lid with a hint of road respectability? The Spada Intrepid could be your next helmet 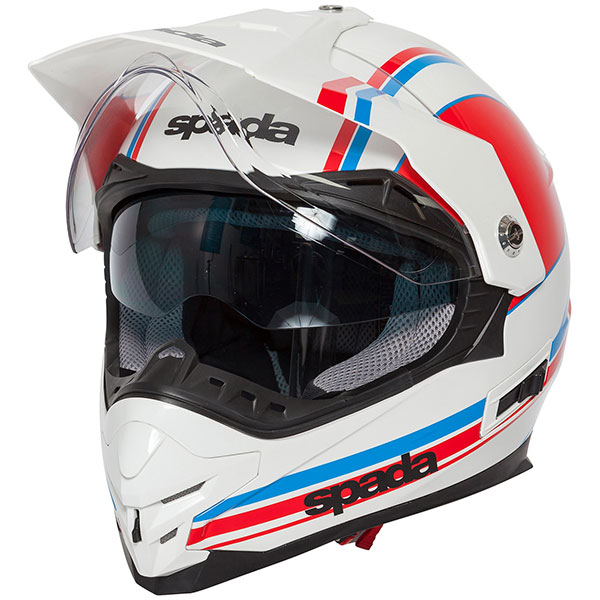 The Spada Intrepid is a good option for those of us who are going for the MX look on a road bike, thanks to good budget price combined with a wide field of view, aggressive motocross styling and a big peak.

I started wearing it towards the end of summer 2019 and rode through to 2020 with it so I feel fairly well informed when it comes to talking about the Spada Intrepid.

The slight distortion from the heavily curved visor was one of the first things I noticed – I got used to this quite soon. On the plus side, the field of view is excellent. There were a few times I had to double check that I’d put the visor down as I could see so much in my peripherals.

The visor is secured by screws on either side, which also hold the peak in place. Although it looks sleek it requires a screwdriver to take the peak off fully and remove the visor for a full clean, which isn’t always convenient.

The peak is large and adjustable to a degree – done by loosening a screw in the top of the shell and pulling it up or down by a few degrees. At first I found the peak would catch the wind a lot, forcing my head back, but after a while I learnt where the peak needed to be to reduce the buffeting.

The sharp curve on the visor does mean there isn’t a full seal along the top edge, which allows rain to run down the inside of the visor. On the cold, rainy and miserable mornings as I headed into the winter months, the combination of a foggy visor and the streaks left from the rain led to some fairly sketchy trips.

Fitting the optional £25.99 Pinlock insert improved the water ingress by acting as a barrier to the water running into my main field of vision. But in heavy rain the water would spill over the Pinlock’s defences and hinder my vision.

With the Pinlock fitted, fogging wasn’t an issue at all on chilly mornings, but when the temperature dropped towards freezing my 45-minute ride to work would be enough to make the Pinlock fog up on its top right edge.

On the topic of visor fogging, the dropdown sun visor doesn’t have an anti-fog coating so with this down and the main visor closed it only took a couple of breaths to make it fog heavily.

The sun visor and front vent are both controlled from the front of the lid and it’s easy to operate both in either summer gloves or thicker winter ones. The sun visor slider has a good clunk at the end point so you know it’s fully up and out of the way.

Controllable ventilation isn’t really this helmet’s strong point – when opening the chin vent it was nearly impossible to feel a difference on my bike, which has a relatively tall screen. This meant I rarely touched it.

There are vents throughout the shell – two on the front and a pair of outlets on the back – and they keep life comfortable on short journeys in warmer weather. However, after about 45 minutes I was glad to get the lid off to let my head cool down a bit.

Giving the lid a quick clean is simple, however a deep clean is a bit more tricky as the angles and protruding parts have a habit of trapping mud and grime in them.

Another plus for the Intrepid is a secure-feeling quick-release chinstrap, which comes in handy when I make the rookie mistake of putting my gloves on before fastening my helmet. It also makes it quick and easy to slip off when I arrive at work.

In my experience the Spada Intrepid is best suited for short trips regardless of the season, due to the misting and overheating issues. If you want a relatively inexpensive but solid helmet which looks and feels premium, this would be a good choice – I’d suggest adding the Pinlock option to eliminate visor misting.

16/ 20
Extremely wide visor gives a very wide view, the extreme curve does give some distortion – but I only noticed it the first couple of times I pulled it on and quickly got used to the distortion.

14/ 20
With several vents on the front, and a pair of exhaust vents on the back air can flow through the helmet reasonably well but you still take it off feeling a bit sweaty. I couldn’t feel much difference opening and closing the chin vents.

16/ 20
The cheekpads are soft and comfortable with thick foam behind them and secured into the EPS liner with two poppers and a strip of Velcro. The skullcap secures at the top of the neck and wraps around to the top edge of the front opening.

15/ 20
The helmet feels solid and all mounting points seem secure, as well as the quick-release chin fastener, which has come in handy when I forget the order in which I need to get ready!

7/ 20
The specification is on the basic side as it’s essentially a motocross helmet with a visor fitted. It lacks most of the luxuries expected from a modern road lid.