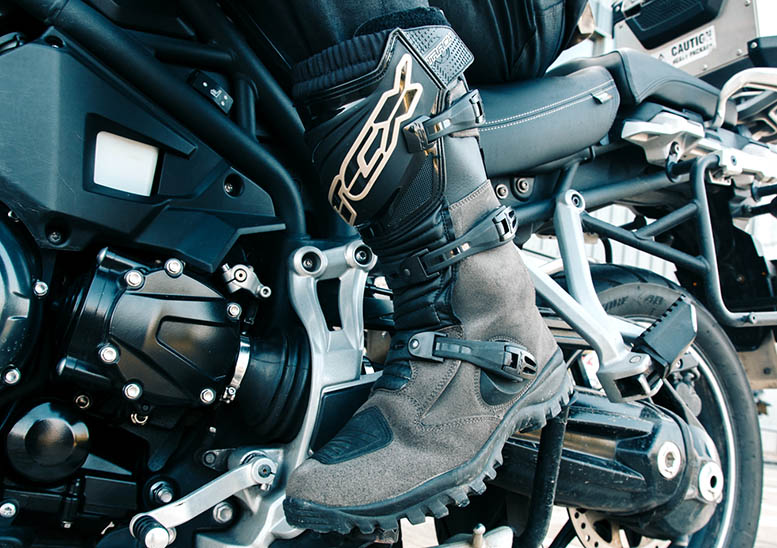 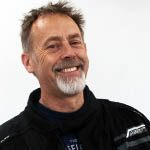 Having spent much of my biking career wearing Sidi sports boots, I decided my venture into the world of touring would benefit from more comfortable and versatile boots.

I tried several different adventure style boots for size, but for me, the TCX Track Evo’s combination of light weight, suppleness, waterproofing and all-terrain sole made them an obvious punt.

They look stylish and robust, but the difference from many other boots becomes apparent the first time you pick them up – they feel substantial but are much lighter than what you would expect for such sturdy looking boots.

The uppers are made from suede leather, which makes them noticeably more flexible than a full-on leather equivalent, with the grey colour complementing the smart lines.

Protection is provided courtesy of a polyurethane shin plate, together with thermoplastic inserts in the ankles, toes and heels. There’s also a polyurethane shift pad on each boot and the elements are kept at bay by a waterproof and breathable membrane.

From the off, these have been seriously comfortable boots with a cushioned feel similar to the AirWair soles many of us know and love from Dr Marten boots.

The three polyurethane buckles are robust and give bags of adjustment allowing you to get that perfect fit, while the elastic collar at the top of the boot keeps out any unwanted muck.

Although TCX are usually quite generous with sizing, I found that I needed to go up one size from normal to get a correct fit with these boots.

Breaking in time seems much shorter than similarly sized boots I have owned, with them being super comfortable from the word go.

They also offer a slightly lower toe-box than the norm for an adventure boot, which makes for easier gear changing. However, when the boots were brand new I fluffed a few gear changes until the shape of the boot wore in a bit.

My thoughts about going for boots at the lighter end of the adventure market were focused around the fact that I’d also be using them during summer touring. This has played out very well, with the light weight and breathable membrane helping me stay comfortable on even the warmest of days, although when stood still in the sunshine they do of course warm up after a while.

At the other end of the weather spectrum, the boots also work pretty well in winter, where they keep me nice and cosy.

The lack of weight combined with the all-terrain style sole, make these very capable of clambering over mountain rocks or scaling Highland castles in search of water beasts. Having failed to locate one of these beasts, I am sadly unable to comment on the boot’s 0-60 time!

In fact, this is my second pair of Track Evos. The first pair took a serious amount of hammer over roughly 19,000 miles in all weathers and finally succumbed to a prolonged Scottish downpour and allowed a small amount of water ingress.

This was way outside of the warranty period but I loved these boots so much that it would have been rude not to order replacements immediately. My current pair now have about 3000 miles on them and have survived everything, including a serious two-week beating at the hands of the Irish weather this summer.

The only minor issue with my second pair is that the insoles came loose very early on. It’s not a major deal and a bit of glue soon sorted it.

20/ 20
I usually take a UK size 9 but had to move up to a size 10 for a good fit. Both of my pairs have been very comfortable boots from the word go.

18/ 20
These have a good level of protection and although quite a flexible boot, still give you the feel of being strapped in and ready for whatever comes your way.

18/ 20
I’ve marked them down due to my previous pair developing a leak after about 19,000 miles. I’ve had no problem so far with the replacements.

20/ 20
A quality boot which is nicely put together, robust, capable and stylish.

12/ 20
They’re missing braced ankles and air intakes, while the waterproof membrane is generic rather than the superior Gore-Tex.